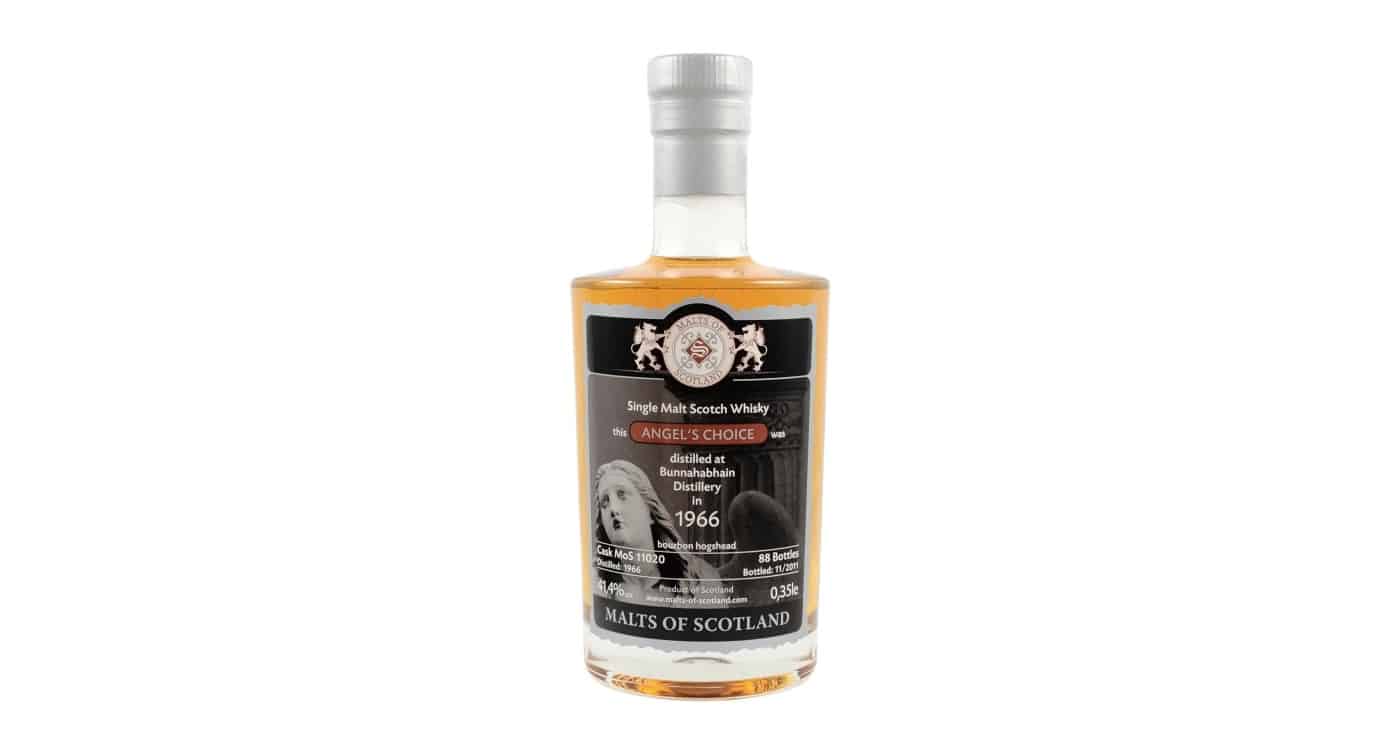 Time to dust off another oldie from the sample drawer. This Bunnahabhain 1966 Angel’s Choice from Malts of Scotland was bottled 11 years ago. What’s more, only 88 bottles of just 35 centiliter each were made available. Now that’s a limited release.

But it’s somewhat troubling that a single cask of whisky only generates such a tiny outturn, even if it is after 40+ years of ageing. What’s more, the alcohol content has dropped to a just barely legal strength. This Bunnahabhain 1966 was in danger of falling below the legal threshold of 40 percent abv for Scotch whisky. And thus it was bottled.

Malts of Scotland’s Angel’s Choice series is actually built around the concept of the Angels’ Share. This is from their website: “Casks for our Angel‘s Choice range have been frequently tasted and appreciated by the angels so that the content is rather low.” That’s usually not the best incentive to bottle a precious whisky. But here we are…

Then again, the Angel’s Choice range has produced some stunners. Actually, judging from the Whiskybase ratings, almost all of them were great or maybe even better than great. Furthermore, I’ve previously tasted an old Bunnahabhain from Malts of Scotland, also bottled at a low cask strength (but not an Angel’s Choice bottling). And it was great!

So, here I am making assumptions while I shouldn’t be. Sure, there are some troubling signs, but I might be in for a huge treat with this Bunnahabhain 1966 Angel’s Choice from Malts of Scotland.

Nose: It’s fruits galore. Ripe pineapple, bananas, mango, quinces and papaya, all rolled into one. There’s honey, a tinge of fennel and plenty of coconut shavings. Finally just a whisper of damp leaves and forest floor.
Taste: Lots of fruit again, all in the same vein as the nose. And then there’s an aniseed/minty element as well. Subtle, but bitter oak and some tannins. It has all the hallmarks of a very good old whisky, but is a bit weak.
Finish: More tannins and oak, with just a sliver of sweet fruits, but it drops off quickly.

Conclusion
Saved by the nose! It's really, really beautiful... as a nosing whisky. It's still very pleasant to sip, but at that point this Bunnahabhain 1966 by Malts of Scotland loses too much terrain to be considered a truly great whisky. I would think it was bottled past its peak, but then again, what do I know.
8.6