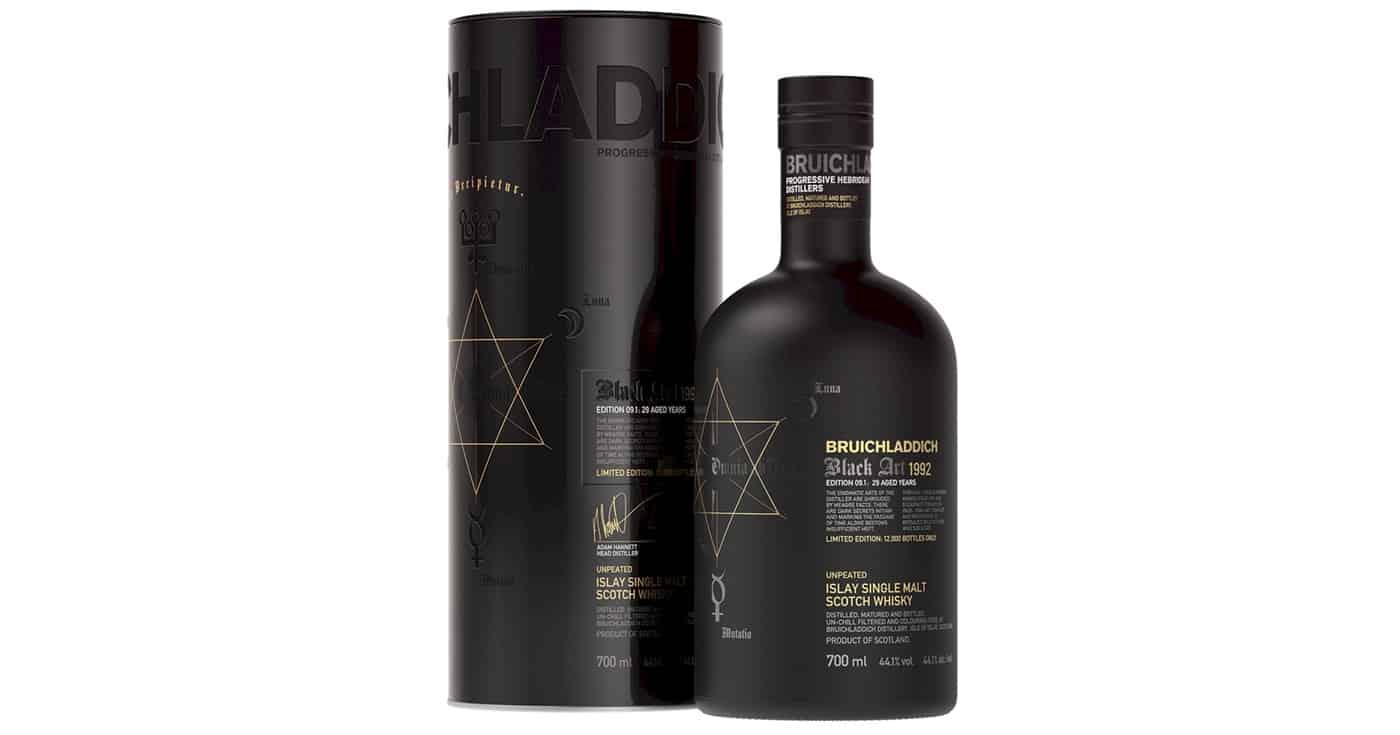 For a distillery that prides itself on transparency and traceability, it’s almost strange that one of their flagship expressions is shrouded in mystery. But for a distillery as open as Bruichladdich, I don’t mind cutting them some slack. Of course, I’m talking about the new Bruichladdich Black Art 9.1, which was officially announced today.

The first-ever Black Art was released in 2009 and from there the legend of the series built. I’m personally not extremely familiar with the range, but I’ve generally enjoyed the editions I’ve tried, such as the Black Art 7.1 from a couple of years ago. However, I’ve seen some complaining online that the quality of the Black Art bottlings has dipped ever since current Head Distiller Adam Hannett took over from Islay legend Jim McEwan.

Seeing as I’ve never tried any of them head-to-head and it has been ages since I’ve tasted one of the first four editions created by Jim McEwan, I can’t attest to that. And while I know not to put too much stock into the ratings on Whiskybase, they certainly don’t seem corroborate a perceived decline. On the contrary, one of the worst rated editions is the first Black Art. Seeing as whisky drinkers often tend to overvalue earlier releases, that’s almost stunning.

However, it’s the Black Art 8.1 that’s rated lowest (but still a respectable 87+ points) on Whiskybase. So, maybe it’s just a case of recency bias? The 8.1 is one of the expressions I’ve never tried, but spoiler alert, it’s successor is undeniably a fantastic whisky. The Black Art 9.1 is the oldest ever at 29 years of age, and maybe that has helped in crafting a delicious vatting. Either way, the release is a testament to Adam Hannett’s skills as a blender. He seems pretty happy with it too:

“With this edition of Black Art, I took inspiration from the groundwork done in the early days of this series, where there was a relentless pursuit to layer flavour. This whisky would rest in some of the finest casks, sometimes for just a few weeks, adding a delicate layer of fruit before we moved the whisky on again. Carefully waiting, watching and tasting, looking to chart new directions with each new cask we used until, finally arriving at a point of perfection.”

The Bruichladdich Black Art 9.1 is from the 1992 vintage, meaning it was distilled entirely before the distillery was mothballed just two years later. Of all the casks currently resting in the distillery’s warehouses on Islay, less than 1% percent is from that pre-closure era. While I’ve no exact figures of the amount of casks Bruichladdich currently sits on, I think it is safe to say that the 12,000 bottles of Black Art 9.1 made a decent dent in the remaining old stock.

I also mentioned something about mystery in the first paragraph. What I meant is that the cask recipe of each of the Black Art editions is kept secret. Part of ti might be that they were less minute in keeping track of all the different cask, barley and production data before Mark Reynier & Co took over. So, compared to other releases by Bruichladdich there’s not much more information I can give you.

Nose: Heaps of red apple peel, but also tinned peaches and apricots with some whiffs of pineapple. There’s some notes of strawberries and cassis too, followed by cinnamon, chocolate malt and tobacco. Delicate and delightful.
Taste: It has a pleasant viscosity with a nice malty character supporting a myriad of darker flavours, such as sandalwood, burnt caramel and coffee grounds, but there’s also coconut shavings and some mint.
Finish: Lingering notes of mocha, mush bananas, honey and toasted bread.

Conclusion
Absolutely spot on, the Black Art 9.1 by Bruichladdich weaves together a multitude of flavours and aromas. Yet it never becomes messy or disintegrated. A dark and mysterious dram.
9