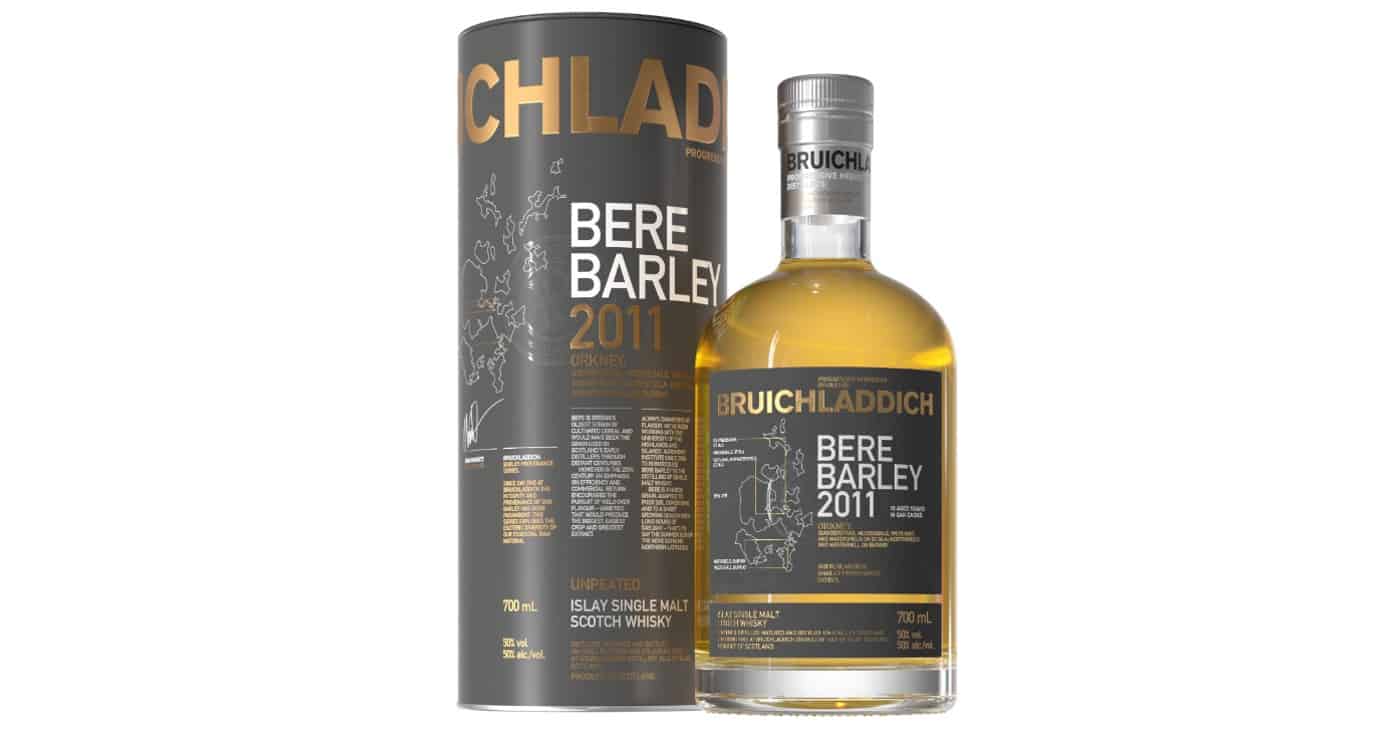 Boy, have I fallen in love with Bruichladdich’s Bere Barley releases over the past few years. This Islay distillery’s spirit has an old school quality to begin with, but the use of a heritage variety takes it up to another level.

Bere barley is Britain’s oldest strain of cultivated cereal. It’s a six-row barley that would have been the grain used by Scotland’s early distillers many centuries ago. The bere barley grains are much smaller and denser than modern varieties such as Laureate and Concerto. Those characteristics make for a different, even unique flavour profile.

“There is something unique about Bere barley spirit and this 2011 vintage is no exception”, saus Adam Hannett, head distiller at Bruichladdich. “It has a tremendousdepth of flavour that really magnifies the DNA of Bruichladdich spirit and shows such complexity. It is another remarkable vintage and exploration of provenance and terroir that shows not all barley is equal.”

However, the downside of bere barley is the lack of spirit yield. Many modern or updated distilleries are capable of producing 420 litres of alcohol per tonne of barley, provided they use a modern variety.

As Bruichladdich is a Victorian distillery and anything but updated, they already only get a spirit yield of approximately 400 litres. Whenever they use bere barley that number drops dramatically to between 320 and 340 litres of alcohol per tonne.

That kind of yield would be a disaster for pretty much any distillery, except for a very select few. For example, aside from Bruichladdich there’ve only been two other distilleries that have released a whisky made from bere barley in the last decade. Those distilleries would be Springbank (specifically this Local Barley release from 2017) and Arran.

Bruichladdich has been working with the Agronomy Institute of Orkney College for their bere barley needs (about 1-2% of their total barley intake). So, why not grow bere barley on Islay then? After all, Bruichladdich all about terroir and they regularly release expressions made from Islay barley.

Well, don’t think they haven’t tried. Bere barley was grown at Dunlossit Farm on Islay for 5 harvests, each progressively more difficult than the last. Bruichladdich emphasizes they’re “not interested in yield; we are only interested in flavour.” But even they had to admit it became uneconomical for Dunlossit Farm to grow barley.

Bruichladdich is currently experimenting with a hybrid of bere barley and modern varieties. They’re growing this cross-breed as part of their barley trials on Islay. The reasoning is that a cross would select beneficial characteristics of both varieties. The first trials apparently became victim to a mismanagement of weeds, “future trials could help unlock favourable flavours and yields, which are important for distillers and farmers respectively.”

Nose: There’s this wonderful farmy quality with lots of grains, accompanied by orris root and bandaids. But also melted butter, peaches and whiffs of beeswax. Then sweet porridge, pot ale and yellow cake. Such a singular distillate.
Taste: Spot on again. The mouthfeel is somewhat oily. There’s an incredibly malty backbone that supports fruity flavours. Think of apricots and orange marmalade. The medicinal side that so surprised me in the previous edition is here again, but also some sweetness like honey and gentle oak spices.
Finish: Lingering spices and rye bread with a tinge of aniseed. Medium in length.

Conclusion
It's a style you have to love. And I absolutely adore it. The Bruichladdich Bere Barley 2011 easily lives up to my expectations. I know this is not for everyone, but I've seen many glowing reviews of the previous release, and yet it took a long time to sell out. I'd be surprised if this didn't disappear of the shelves sooner.
9