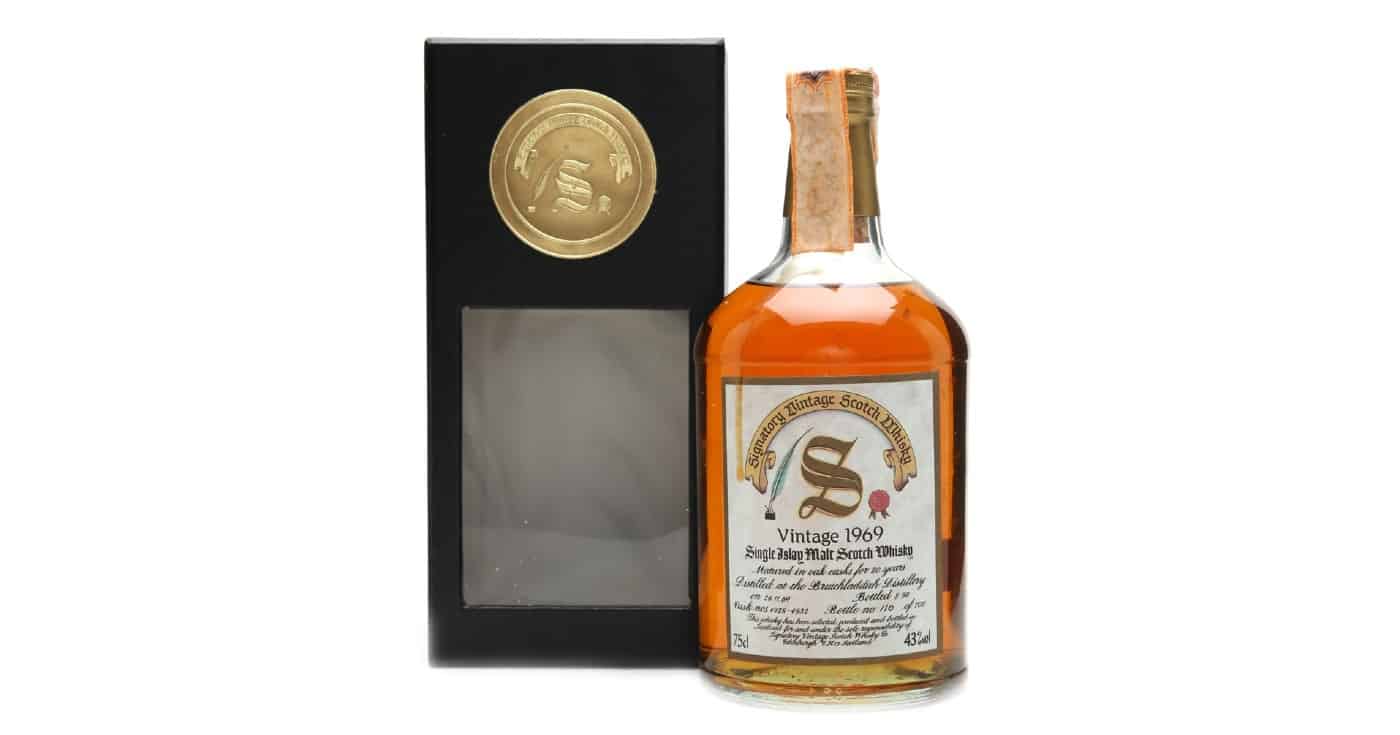 Bruichladdich is a distillery that has endeared itself with whisky fans during its current era, but once it was just another Scotch distillery producing in bulk for blended whisky brands. This Bruichladdich 1969 20 Years from Signatory Vintage is from that period.

While Bruichladdich is a forward-thinking, progressive brand and releases a lot of innovative whisky that pushes the boundaries, the distillery itself is antiquated, traditional and from a different time. Well-cared for, but old. However, when it was built in 1881 by the Harvey brothers it was one of Islay’s most modern operations.

There were three Harvey brothers, William was the oldest, John, the middle child and Robert the youngest. Their decision to build a distillery on the remote Isle of Islay was guided by the invention of the flat-bottomed steam boat, also known as the Glasgow Puffer. It revolutionised the transport of bulky objects along Scotland’s west coast. Together they built a state-of-the-art Victiorian distillery, but before they were really up and running, the brothers had a falling out.

Bruichladdich switched hands often from the 1930s on out and was owned by Invergordon Distillers when it distilled the five casks that Signatory Vintage vatted for this Bruichladdich 1969 20 Years. Invergordon Distillers replaced the original spirit still two years later, even adding a twin set of wash and spirit stills in 1975 to increase capacity.

That was just before the industry-wide crisis in the 1980s. While Bruichladdich held on initially, it was closed in October 1993 when Whyte and Mackay took control of Invergordon Distillers. It wasn’t heard from again until an infamous group led by Mark Reynier and Simon Coughlin bought the distillery in 2000. And we all know how that has worked out…

Nose: Quite mineral with touches of wet pebbles and ozone, but also notes of orange blossom, honey and (slightly watery) Galia melons, followed by some sultanas. There’s a whiff of rubber here too. Not the most expressive malt.
Taste: At times pretty sweet and dessert wine-esque (without the sticky mouthfeel) with touches honey, Muscovado sugar and dark caramel, but also a whiff of anise, cough syrup and hessian. Some slight bitter and tannic notes as well, with finally even a whiff of rubber.
Finish: Lingering herbs, somewhat grassy and a touch of fudge. Not the longest.

Conclusion
It's good, but there's something not clicking entirely. Maybe it's the balance, because this Bruichladdich 1969 20 Years from Signatory Vintage can't quite make up its mind. Is it fruity and sweet, or more austere, herbal and mineral?
8.3