Before I embarked on my most recent trip to Islay, I asked around to discover what tour or tasting I simply had to do. One that kept coming forward was the Lagavulin Warehouse Demonstration, which was pretty great indeed. The other I was advised multiple times was the Bowmore Craftsman’s Tour. At 55 pounds for a tour I was a bit reluctant at first, but now I find myself thinking: is this the best distillery tour you can book?

As I stayed at the nearby Lochside Hotel, it was only a short walk before I entered the Bowmore visitor centre. After announcing my arrival I walked up the steps to the beautiful bar, with stunning views of Loch Indaal. I should’ve taken a picture, but that probably wouldn’t have done it justice anyway.

I positioned myself into a comfy chair across from Jerome (if I remember correctly). Born in the Czech Republic, he’d been living in Germany for over thirty years already. Jerome would turn out to be an excellent guy to partner up with for the Bowmore Craftsman’s Tour.

Our wonderful guide Heather MacIndeor (and when I say wonderful, I mean she was truly great) informed us that a group of four other participants had failed to show up. That meant it would be just Jerome and me going on the tour, which was fine by me. Less people means more of a private tour, which is always the better option.

After a short visit to the water source (I know water is really important for whisky production, but looking at a babbling brook is only interesting for a minute or two) we quickly moved on to the malting floors. Bowmore is one of the few distilleries with their own malting floor: 25 percent of the barley they use is malted in-house. 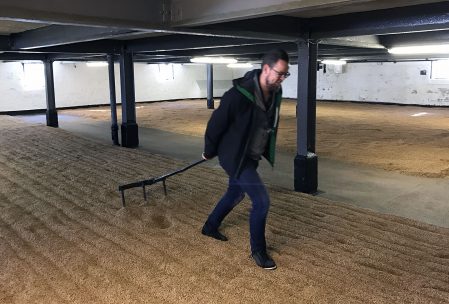 I’ve seen the malting floors at The Balvenie and Springbank in action, so it wasn’t new. But this time I got to play around a bit with the malt turner (essentially nothing more than a plow, except for barley). Doing one lap with the malt turner was quite enough for me, as it is a pretty intense job.

Every four hours the barley needs to be turned to ensure proper temperature distribution. It’s not hard to see why barely any distillery still malts their own barley. I wish they would, but I can understand why most use commercial maltsters. Just imagine Glenfiddich and their annual production of 12 million litres. Their malting floors would have to be huge.

One of the highlights of the tour is actually entering the kiln, which is where the barley is dried. I’ve been inside a kiln before, but never during the actual drying process. At Bowmore for the first sixteen hours peat is used to dry the barley, after that hot air does the trick. Lucky for us they were in the second part of the drying process, meaning we could actually step inside the kiln. 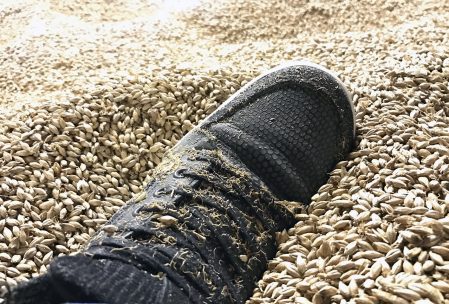 What to do when you’re standing inside a kiln in roughly 50 centimeters of barley? Heather quickly showed us. She dropped down and nearly disappeared. Jerome and I simply followed suit. It was a strange, but really cool sensation to be sitting there. Sort of like sitting on a bean bag, but without the bag.

Expunging the barley from my shoes and clothes took some time. I even found barley seeds in my suitcase when I was already home. Worth it though! Our tour of the kiln wasn’t finished yet, as we went to take a look in the space under the drying room. Not much to say other than that it was dark and hot. A sip of Bowmore Devil’s Cask might’ve been apt here. 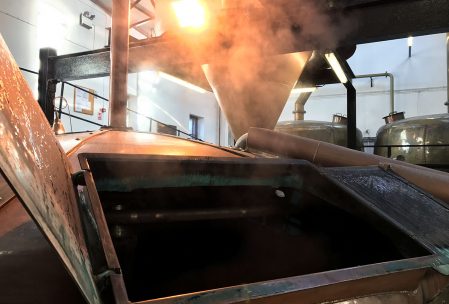 The mash tun looked impressive with its large copper dome. Also unusual: the two copper water tanks. At most distilleries these are made of plain looking stainless steel. Since there was no mashing going on, we couldn’t taste any of the wort. But that’s okay, I feel the wash/beer is much more interesting to taste anyway. So onto the washbacks!

Bowmore has six in total, each named after a previous owner of the distillery, and all of them capable of fermenting 40.000 litres of wort. As was customary during the entire Craftsman’s Tour, Heather in no way rushed us. We we’re allowed to take all the time we wanted, as she opened each and every washback, letting us taste from some.

One of the washbacks at Bowmore at peak fermentation. Video by @officialwordsofwhisky

She also displayed a lot of knowledge and gave us some interesting information. For example, at the time I visited (midway through October) they were only doing 11 mashes each week, instead of their regular 18. Slower production, and thus taking more time for fermentation is probably a good idea, but according to Heather that was not what was going on here, as the cutback in mashes had to do with a lack of storage in the warehouses on the mainland. Fermentation takes just over 50 hours at Bowmore, sometimes a little longer because of the weekends. 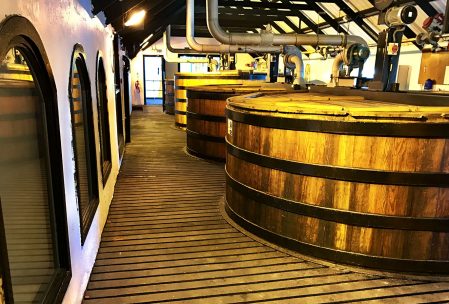 Walking past the six large wooden vessels we exited the washback room into the still room. A majestic sight. Just below us were the four copper stills. To illustrate how awesomely relaxed the Bowmore Craftsman’s Tour is, this is also where a group of visitors doing a regular tour caught up with us. They were quickly guided through the still room, whereas we walked down and casually chatted with the still-man.

The still room is where Jerome started getting a bit nervous. Never in his life had he tasted low wines. Neither have I, but contrary to Jerome I can’t say I’m that curious about the low wines. Reluctantly he asked Heather if it might be a possibility. I expected a simple ‘no’, since I never heard of anyone requesting a sip of the low wines. And during any other tour that probably would’ve been the case.

For a moment it looked like Jerome was in luck, as the spirit safe was open (heat build-up otherwise prevented the still-man from doing reliable readings) and a low wine distillation run was currently coming through. Heather tried her best and went searching for the manager. But sadly for Jerome, we weren’t allowed to taste the low wines because of health and safety reasons. I didn’t really mind, but seeing how passionate Jerome was about this particular subject,  I really hope he succeeds in his quest at another distillery. 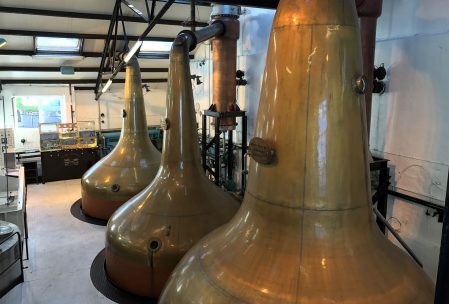 Tasting the new make spirit however wasn’t a problem. It was encouraged actually. Bowmore peat levels are at 25 ppm, very gentle compared to most other Islay distilleries. Yet it was still surprising that when nosing and tasting the new make spirit there was barely any peat to be found. It is a very fruity new make. Only after I rubbed some between my hands did the peat smell really come through.

By this time it was nearly 4 o’clock. That meant we we’re touring over two hour already, and the highlight was yet to come up! I’m of course talking about a visit of the legendary Bowmore No. 1 Vaults, the warehouse located below sea level on Loch Indaal. According to Heather the oldest parts of this warehouse dates back to the end of the 18th century.

During a regular tour you do get to visit the warehouse, but you stay in a sort of entrance hall, a small room walled off with glass panels. You can look at all the casks, but can’t touch. The glass room is also the place were you can fill your own bottle straight from the cask. We filled some glasses with a truly delicious Bowmore 2003 from a first-fill bourbon hogshead. Then Heather opened the glass door and in the No. 1 Vaults we went!

You have old dunnage warehouses and then you have OLD dunnage warehouses. The No. 1 Vaults truly belong in the latter category. Always such a treat to walk around in one of these. The smell of the angel’s share alone is worth it. At one point we reached the inner sanctum of the No. 1 Vaults, where two casks were waiting to be opened by us. On the other side of the warehouse wall, mere feet away, was the sea. 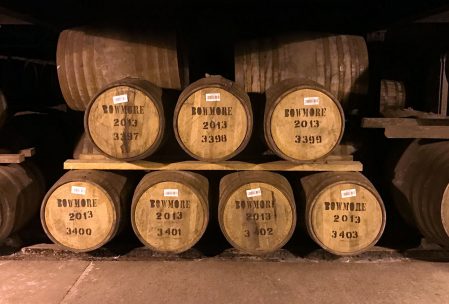 One first-fill bourbon barrel and one first-fill oloroso puncheon. The first filled with Bowmore new make in 1999, to other filled a year earlier. The result was top-notch. Easily better than that handfill we already tried, which was already of a very high quality. Tasting Bowmore this sensational in such a historic environment. I don’t like clichés, but it really doesn’t get much better than this. But…

This is also the point where I’d like to voice the only minor criticism I have about the Bowmore Craftsman’s Tour. It would’ve been nice to have had to opportunity to take home a bottle of one of those casks. Just a small 25cl bottle would’ve been fine. I’d have happily paid for it too. Although at Laphroaig’s Distillers Wares tour (similarly in nature and price) a small bottle of straight from the cask whisky is complimentary. Now the only souvenir I got to take home was a Bowmore tasting glass. And a lanyard.

Let’s end on a happy note, because after our tasting inside the No.1 Vaults we returned to the bar at the visitor centre. There we were invited to another dram. I chose the Bowmore 23 Year Old Port Matured, while Jerome went for the Bowmore 25 Year Old. It was close to 5 o’clock already and the view over Loch Indaal was just as beautiful as it had been earlier that day.

So, to answer the question I ask at the beginning of this blog post: Yes, I believe this might be the best distillery tour available. It certainly is in the top 5. Granted, I haven’t done every tour in Scotland, but I’ve been on quite a few by now, so I feel I can properly judge the quality of a tour. And also, I do know what’s on offer (all you have to do is visit distillery websites).

The only distilleries that are able to offer a similar experience are the ones with malting floors, quickly eliminating almost all other distilleries. And the distilleries that do have their own malting don’t have Heather MacIndeor. And when you combine her hospitality and knowledge with an extended tour of the Bowmore distillery, you have an unbeatable combination.