The year 1993 is apparently a very good year for Bowmore. One explanation for this can be found on onversneden.com, the now retired blog of Johan van Samang. He states that Bowmore (for whatever reason) wasn’t very popular with blenders in 1993, and therefor the whisky from that year is a bit different. He believes that the fermentation period was longer, resulting in a richer whisky.

Thosop is a cult indy bottler that was started by Luc Timmermans and then continued by Dominiek Bouckaert a.k.a. The Whiskyman. Two well-respected people with a lot of whisky knowledge. Their Handwritten label-series contains some bottles that are now highly sought after.

So we have Bowmore from what is supposed to be a very good vintage bottled by a cult bottler. Wonderful ingredients for what is hopefully a whisky that is as good as advertised.

Nose: Earthy and some pretty intense peat at first. Zesty. Than a lemon fruitiness. Lemon tart and cookie crumble. It gets fresher given time, with green fruits and some sugar as well.
Taste: Peat smoke, pepper. Very dry and briny. Some lemon and ginger, but I struggle to find more fruit here. Too bad.
Finish: Peaty and zesty with smoked salmon. Then there’s more green and yellow fruits, the ones that I found lacking at first.

What can I say? I expected more. Not a bad whisky by anyone’s measure. Pretty good actually. But it didn’t live up to my expectations. 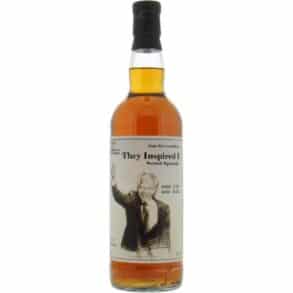