If you talk to Bowmore-adepts, they’ll probably rave about Bowmore from the sixties. And if that’s not a possibility, a Bowmore from 1993 also comes highly recommended. Why? Well, it was right after Suntory took over the distillery and according to Ruben from WhiskyNotes.be the new Japanese owner sorted out a couple of things. The distillery was supposedly running at a much slower pace, with production being less important, and with doubled fermentation times and deviant conditions in all kinds of ways.

I’ve only tasted one other Bowmore from 1993. Actually, there aren’t many, with Whiskybase only listing 26 different expressions from that particular vintage. The one I tried didn’t really impress, so I approached this one from Berry Bros & Rudd with a healthy amount of skepticism.

Nose: Pretty damn powerful (alcoholic), so nose carefully 🙂 Some soft peat, tar and wet treebark at first. And then the fruits happen. And a lot as well. Lemon zest, lime juice, peach, grapefruit and tangerines as well. Spot on!
Taste: Oh, wow! Let’s start with the mouthfeel, which is fat and oily and mouth-coating. And then the abundance flavours. To say this is a fruit basket is an understatement. So much is going on. Lots of grapefruit and passion fruit, as well as mango and papaya. A pretty amount of pepper. Some notes of licorice and hints of peat, slightly zesty too.
Finish: Long and warming and smokey and salty and fruity and…

I was skeptical, but that turned out to be a mistake. What a great whisky this is. Unbelievable almost that a distillery can produce a 12 year old whisky of such incredible quality. What an experience… 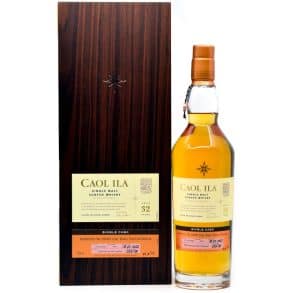