The 7th day of the Blind Tasting Competition brings us the third sherry-influenced whisky in a row. After a lovely Glenlossie and a wild Edradour, now it is Glenfarclas’ time in the spotlight. This 9-year-old from 2009 was selected by importer Han van Wees to celebrate his induction as Master of the Quaich in 2018.

Han van Wees is a legend in the Netherlands who is oftentimes credited with getting the Dutch hooked on single malt whisky. He was the first to import many important brands into my country, such as Glen Grant, The Macallan, Highland Park, Laphroaig, Springbank and Glenfarclas. The latter of which has become almost synonymous with Van Wees.

Surprisingly, when nosing and tasting this sample, Glenfarclas never even entered my mind. Maybe I blacked out, and it sure was an oversight, but the distillery just slipped my mind. Which is weird, because it is probably the best sherried Speysider of this moment. And that’s exactly what I was digging my mind for: a young, sherried Speysider at a high strength.

I though it might’ve been the Tamdhu Batch Strength (a whisky without an age statement), but entered 10 years in case it turned out to be the GlenAllachie 10yo Cask Strength. My saving grace in terms of the competition is that I guessed the region correct, and had the alcohol percentage and age almost spot on. That way, I gathered enough points to leapfrog into first place, which I’m pretty chuffed about halfway through the Blind Tasting Competition.

Nose: Dried fruits and cocoa powder, as well as chocolate truffles. Followed by caramel glazed red apples. Somewhat one-dimensional, but pretty mellow, especially at such a high percentage. Water brings out a touch of soy.
Taste: Here it shows its (relative) youth. A sherry bomb with lots of oomph. Sweet arrival with cherries, milk chocolate and some mint leaves. Soft notes of pepper. There’s a touch of pomelo. Water reveals a more syrupy, slightly fruitier side.
Finish: Drying with chocolate sweetness and a bit of lingering chili heat.

A satisfying Glenfarclas bottled in celebration of a remarkable milestone. Best of Whiskies has a few bottles available still. 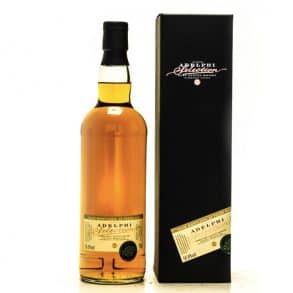