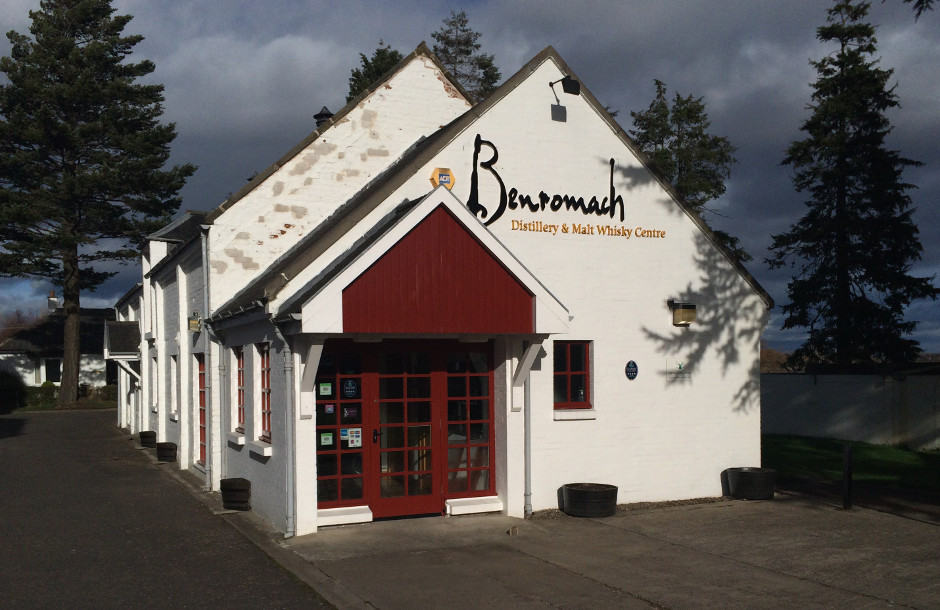 Benromach, The Smallest Distillery in Speyside

Plain and simple, the distillery visit to Benromach was a lot of fun and I would recommend it to everyone! Everything was perfectly organized, Susan Colville (of Misswhisky.com fame) was a pleasant and well-informed guide and the tasting afterwards was superb. Do you want to know more? You do? Okay, here are some of the highlights of my visit.

But first some general info on Benromach, the smallest distillery in Speyside. Last year they produced only a little over 130.000 liters of spirit, which is almost nothing compared to mammoth distilleries like Glenfiddich. They do however plan to more than double their production this year. They have the capacity for it, so why not?

It is owned by independent bottling giants Gordon & MacPhail and is situated in Forres, right in between Elgin and Inverness. G&M acquired Benromach in 1993, but by then it had already been closed for ten years. The only thing that was left in the buildings were the washbacks, so the distillery had to be completely refurbished. And since were talking about a teeny, tiny distillery, equipment had to be specially made to fit. Almost the entire production process takes place in one room. It wasn’t until 1998 until whisky was being produced at Benromach again.

A scoop for Words of Whisky!

Benromach is a very picturesque place to visit, and there’s a very pleasant vibe in the visitor center. My girlfriend and I were the first to have booked the Discovery Tour, a new tour for 2014. I thought that was pretty cool! Seeing the old Boby Mill was nice also: a tiny mill for a tiny distillery. And what a sharp contrast compared to the massive malt mill I saw at Glenfarclas just hours before. The stills at Benromach are specifically tailored to get a very oily spirit. The orbs right below the neck were relatively big, to try to get as much contact with the copper as possible. Sadly no photography was allowed inside the production room, so you’ll just have to believe me.

They are currently in the midst of building two new warehouses. Right now there are 7500 casks stored at Benromach, and there’s only room for 500 more. The building of the warehouses is behind on schedule though, so there’s a good chance that they’ll have to temporarily store some casks with G&M. The casks they use are exclusively first fill. They did use some refill casks right after production resumed in 1998, but it was quickly discovered that the spirit doesn’t do well in them.

The best and second best

The second best thing (I’ll get to the first best thing in a minute) about the tour was simply walking around and talking to home brand manager Susan Colville. A lot of the credit for this visit being such a nice experience goes to her. But she has to share some of the credit with distillery manager Keith Cruickshank. Our visit was during a Friday afternoon, and people were clearly gearing up to go home and enjoy their weekend. But when we went back to the visitor centre after the tasting, we were in no way rushed to leave. Keith and Susan took all the time to talk to us and they both accompanied  me when I went to fill my own bottle from a first fill sherry cask from 2002. They were extremely hospitable.

Did I forget something? Of course I did. A good tour is nothing without a proper tasting. No disrespect to Susan and Keith, but it was the best thing about the tour. It was an extensive tasting of the Organic, the 10yo, the CS from 2002 and two oldies from before the closure in 1983: the 30yo and the 1976 vintage. I was very pleasantly surprised, but I won’t go into too much detail. I’ll do that in two follow up posts. No worries, because you won’t have to wait long. I’ll publish my notes within the next seven days.

Next
Teaninich: A Great Nose Equals A Great Taste?