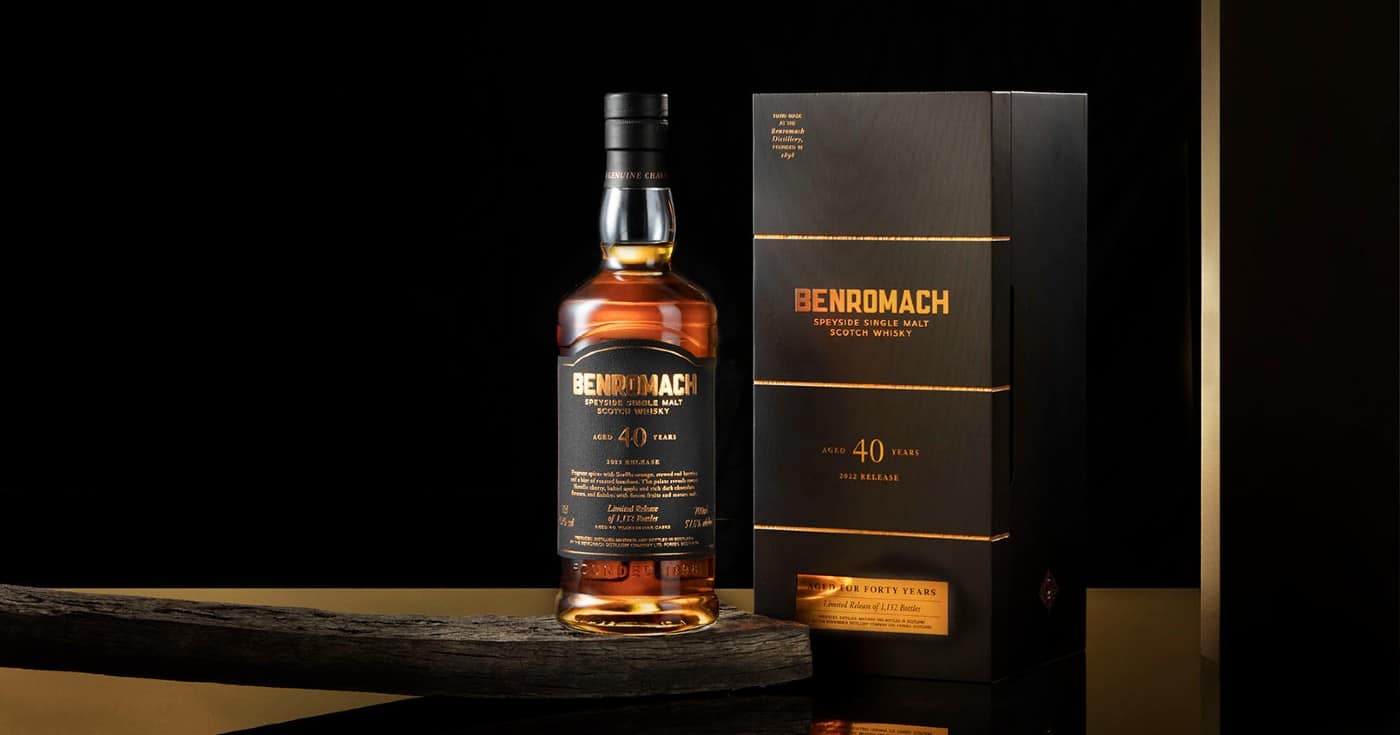 “Would you like to try a rare Benromach launching soon?”

That was the subject line of an email I received in June. Asking such a question is answering it. I didn’t think too hard about what release they were referencing exactly, but I should’ve known they were hinting at the 2022 Release of the Benromach 40 Years. Last year’s edition was exquisite and recently picked up the ‘Best in Show‘ award at the San Francisco World Spirits Competition. I’ve high hopes for this one as well.

At first look the second batch of the Benromach 40 Years seems very similar, but it is bottled at a slightly higher strength. Also, contrary to last year, there’s no mention of a vintage or an exact cask type, instead the press release just mentions sherry casks (as opposed to first-fill Oloroso casks for the 2021 Release). Finally, the price has gone up significantly – from £1,500 for the first batch to £2,000 for this one.

For those of you only familiar with Benromach distilled under the current regime, these pre-1983 releases don’t much resemble what owner Gordon & MacPhail releases nowadays. The distillery was completely rebuilt during the 1990s, and not necessarily with the idea of conserving the distillery’s original flavour characteristics.

That may sound like an affront, but was probably a good thing. Everything in the modern Benromach distillery is geared towards producing an old-style Speyside whisky. That’s why they now use lightly peated malt, whereas the Benromach 40 Years 2022 Release was made from during an era when the distillery produced unpeated whisky.

So, tasting a whisky such as this is an opportunity to time travel. Back to when Benromach was still largely an anonymous producer for blends. Not exactly the glory days of the distillery, but a worthwhile experience nonetheless. I’ve been lucky to have tasted many Benromach from before the distillery was closed temporarily. And they’ve been really good more often than not…

Nose: Dark, brooding and intense. Notes of strong coffee, fresh ginger, black pepper and cigar tobacco, but then an abundance of (dried) red fruit. Raisins and dates, but also orange peel, poached pears and ripe banana. Finally a whiff of cocoa powder and meringues.
Taste: Uhm, yes please. It’s incredibly alive and vibrant at such an advanced age, just like last year’s release. And the mouthfeel is creamy. There’s a touch of smoke, some leather, a fair amount of oak spices and espresso too. Then some cherries, dark chocolate truffles and a whisper of copper.
Finish: Lingering chocolate and some herbal touches. Also some charcoal. Very long.

Conclusion
Judging from memory, I would say the Benromach 40 Years 2022 Release is really similar to the first batch. More lively and vibrant than you'd expect, but also with the elegance you hope to find after four decades of maturation. And there's the added bonus that it swims very well.
9.1