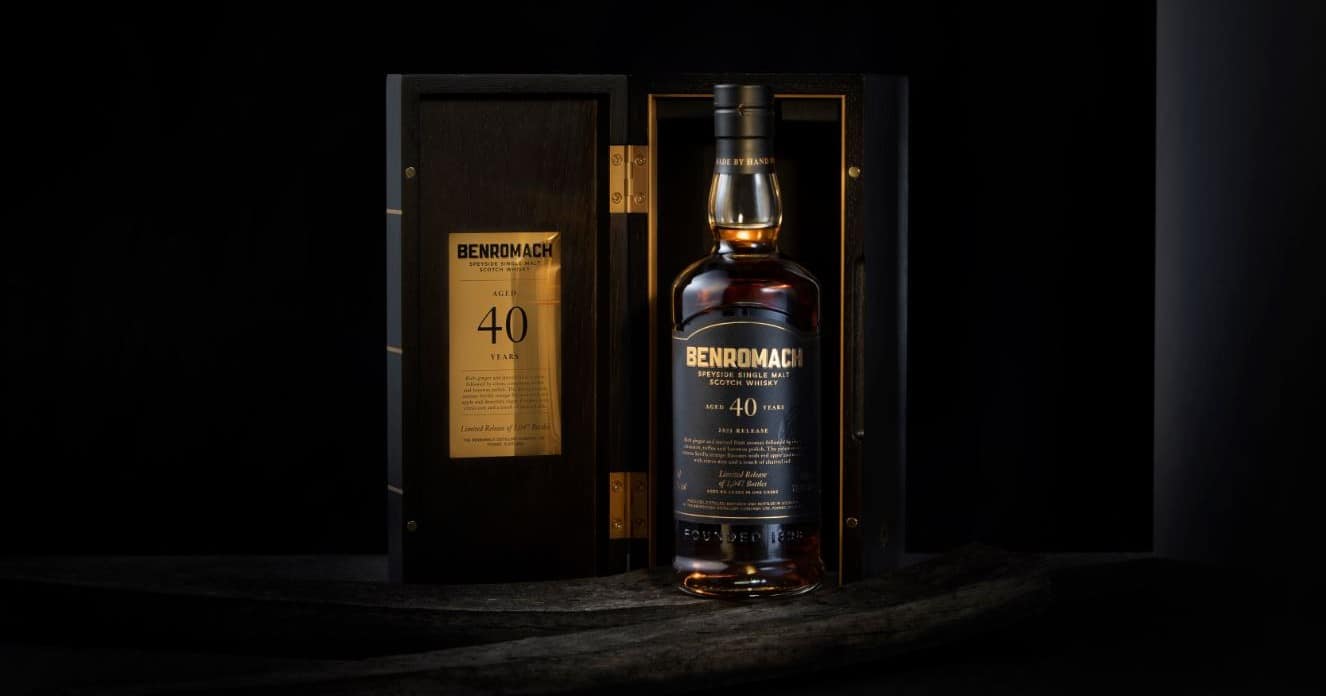 Longtime readers of this blog might remember my Benromach Extravaganza, a series of posts all about Benromach. I reviewed a good amount of older Benromach, all distilled when Diageo still owned the distillery. The same is true for the new Benromach 40 Years, the first annual batch release with just over 1,000 bottles available worldwide.

For those of you only familiar with Benromach distilled under the ownership of Gordon & MacPhail, here’s a quick history lesson. Benromach closed its doors in 1983, along with many other illustrious names like Port Ellen and Brora. It sat silent for a long time. Even when Gordon & MacPhail bought the distillery in 1993, it took until 1998 before spirit was running from the stills again.

However, those weren’t the same stills as before. The Benromach distillery that reopened in 1998 was in effect a completely new distillery. Pretty much all equipment was replaced and the philosophy of the new owners was drastically different. Instead of producing for blends, as Benromach had mostly done before, the distilling team was tasked with recreating an older style of Speyside whisky, based on the vast sample library of Gordon & MacPhail.

“From the beginning it was clear that we wanted to make whisky that tasted like it was made fifty years ago”, explains distillery manager Keith Cruickshank, who I talked to for an interview way back in 2015. “At Gordon & MacPhail they have a big library filled with very old samples of whisky. It was used as an inspiration for the kind of style we wanted to make at Benromach.”

Isle of Jura 10yo Origin

This 2021 release of the Benromach 40 Years is bottled at cask strength and was laid down to rest in 1981. It has spend four decades in first-fill Oloroso sherry casks. Here’s what Cruickshank has to say about his latest release, now the oldest expression in Benromach’s new-look lineup, which was first launched in June 2020.

“This is the first time we have added a higher aged expression into our portfolio as an annual batch release. Each batch will be bottled at natural strength and will reflect the nuance and character of the casks selected for bottling each year.

Of course I won’t just take his word for it. Also, I took these quotes from a press release, which means they’re probably embellished quite a bit. But that’s fine, it’s the job of the marketeers to make the new whisky sounds as attractive as possible. It’s my job to see through that.

Thankfully, Benromach were kind enough to send me a sample of the new Benromach 40 Years. In case of doubt, this kindness doesn’t influence my judgement.

Nose: Somewhat shy at first with a hint of oilskin, furniture polish and burnt candle wick. But that’s when the dry fruits come out. It’s all about raisins, dates and figs, but also cherry syrup. Touches of chocolate truffles and green banana also. Water brings out notes of puff pastry and kiwi skin.
Taste: Plenty of tobacco and wood polish. It’s reminiscent of an older Gordon & MacPhail release distilled during the same era, also very vibrant yet more refined. Plenty of oranges, marmalade, black pepper and a touch of menthol and smoke. A whiff of espresso and cherries too. Finally a touch of chocolate and Earl Grey.
Finish: Slightly drying with more of the above, as well bright herbal notes.

Conclusion
First off, the Benromach 40 Years is a fantastic whisky. But, it is also somewhat confusing. In a good way, I suppose. It has a vibrancy and, dare I say, youthfulness that is unexpected, yet is also refined and shows the depth associated with lengthy maturation. I'd love to explore this more, but alas, my sample bottle is empty.
9.1