Benromach has entered an entirely new chapter with the release of the Benromach 21 Years. Not because this is part of their (much-maligned) redesign from last year, but because we now get to judge how their spirit behaves after more than two decades of maturation. That’s very exciting, especially considering my well-documented affinity for the distillery.

While Benromach was founded in 1898, Benromach is basically a new(-ish) distillery. It’s by no means part of the wave of young distilleries from the last 5 to 7 years, but new nonetheless. After being mothballed in 1983 the distillery was bought 10 years later by independent bottler Gordon & MacPhail. An extensive refurbishment took five years and when the dust settled in 1998, Benromach was basically as good as new.

The original distillery buildings were still intact, but pretty much all the equipment was new. Add Gordon & MacPhail’s philosophy and you’ve basically a new distillery. Instead of trying to emulate the spirit Benromach produced before it was shut down, the new owners had their own ideas. The inspiration for the new (and improved) Benromach flavour profile was found in the vast sample library of Gordon & MacPhail. After tasting many old Speyside whiskies from the 1950s and 1960s, they decided emulate that old-school flavour profile and to produce a whisky with a dash of smoke—as was common in the old days—using barley peated at 12ppm.

Have they succeeded in that goal so far? That’s difficult to judge. The Benromach 10 and Benromach 15 Years have an undeniable traditional quality, more so than almost any other distillery out there, save for maybe Springbank. But especially the Benromach 10 Years is much smokier than any post-war Speysider I’ve ever tasted. Then again, I’ve barely tasted any old young Speysiders. Meaning the examples I’ve tried from the post-war decades were mostly ancient and had matured much longer than any modern Benromach.

But now that there’s a release that has aged over two decades, the moderate amount of phenols from the barley should barely be present in the Benromach 21 Years. You could see it happening in the Benromach 15 Years, which is much more delicate already. Or the Benromach 20th Anniversary Bottling, which at 19-years of age had barely any smokiness left. Just a whisper. Matured in first-fill sherry and bourbon casks, I suspect the Benromach 21 Years to be very much in that vain.

Nose: So extremely elegant yet rich. Oranges, milk chocolate, leather and tobacco leaves, with just a tinge of triple sec. Subtle whispers of fudge, damp oak and a very gentle barbecue note. Finally just a whisper of honey and some intriguing umami notes.
Taste: Creamy mouthfeel. The oak is quite dominant, without veering over the edge. Somewhat dry with a tinge of black pepper and breakfast tea, but also fudge, brown sugar and orange peel. Whispers of menthol and earthy smoke.
Finish: Somewhat oaky with gentle spices and citrus peels. Medium in length.

The Benromach 21 Years shows an entire new side of this distillery. As a result of all the extra maturation time, the peaty phenols are very mild compared to the classic Benromach 10 Years. Instead this has become much more of an old-school Speysider than it already was. Bravo! 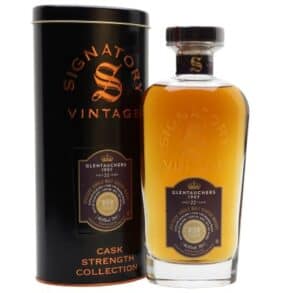