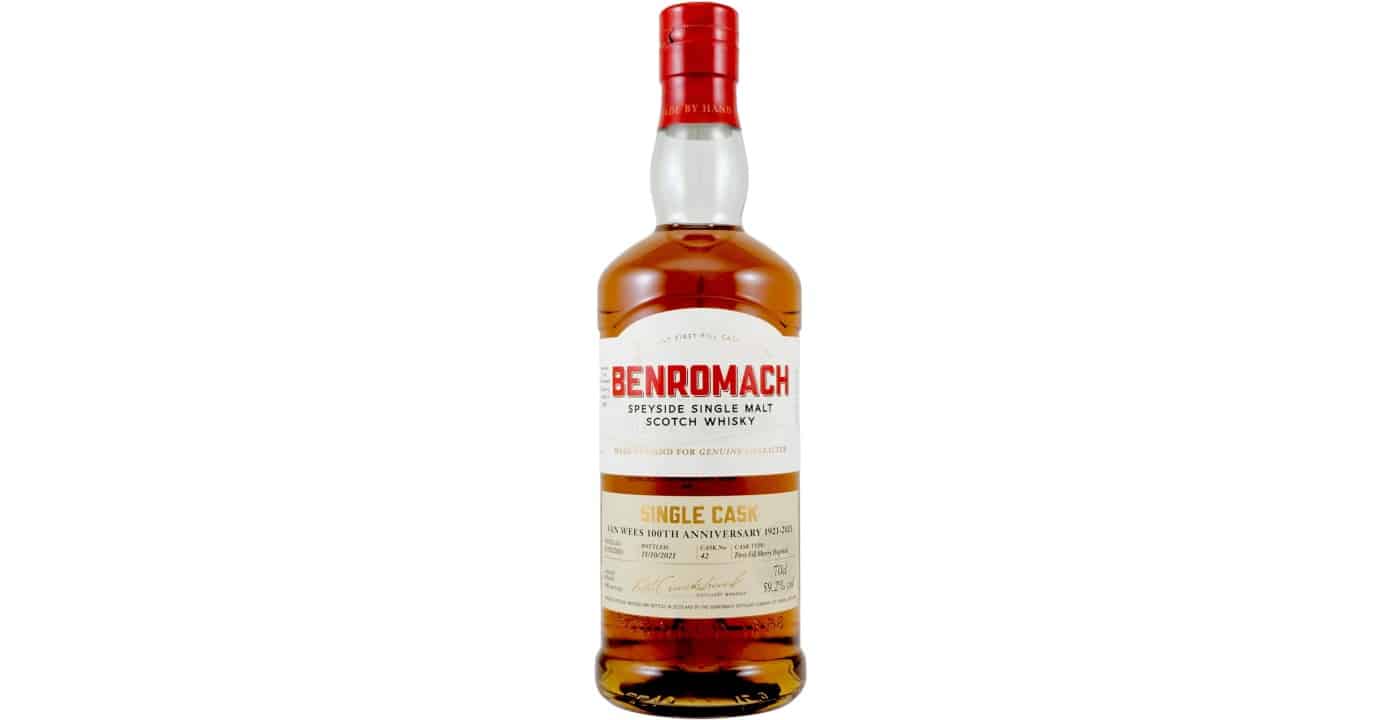 This week will be all about the 100th Anniversary of Dutch importer Van Wees. They represent brands such as Arran, Gordon & MacPhail and Signatory Vintage. But we’ll kick this week of with a single cask Benromach 2011 10 Years from a first-fill sherry hogshead.

Before we dive into tasting notes for the Benromach 2011 10 Years, let’s first take a closer look at the company that is celebrating its 100th Anniversary. Whisky enthusiasts in the Netherlands are likely familiar with Van Wees, which is a family owned company run by pater familias and Master of the Quaich Han van Wees and his son Maurice.

Han is often credited with teaching the Dutch how to drink whisky. For anyone who’s ever attended a tasting led by Han, the following origin story is likely familiar. It is part of Dutch whisky lore. While the company Van Wees has been around since 1921, their involvement in whisky really only started in the 1960s. That’s when the MS Hornland (pictured below) was damaged on her way to the Port of Rotterdam and sank in the Nieuwe Waterweg, which connects the port to the North Sea.

On board the MS Hornland were many sea containers filled with whisky and champagne. They were acquired by Han; at a nice discount of course. It appeared this whisky (mostly blends) was of much better quality than what was usually made available for the Dutch market. When Han started selling his newly acquired stock, he was actually contacted by many Scottish companies who wanted to buy back their stock.

“The clientele for this whisky also started asking for Single Malts, so [my father] contacted the Scottish companies again and asked for Single Malt Whisky,” Maurice van Wees explains in this interview. “By this time one of the few companies selling Single Malts were G&M and Cadenhead. The [latter] made special bottlings of young Ardbeg and Laphroaig for Van Wees which were purely unique at that point and people were amazed by the peaty taste. Han even got Ardbeg Distillery to bottle 5-year-old Ardbeg especially for The Netherlands.”

Fast-forward 50+ years later and Van Wees is one of, if not the biggest distributor of whisky in the Netherlands. They’re highly respected. And Van Wees is also the oldest and largest independent bottler of The Netherlands, having bottled well over a 1,000 casks since 1994.

Due to their long and good relationships with many of their brands, Van Wees is regularly able to release exclusives. I doubt they had any problems convincing Benromach (and its owners Gordon & MacPhail) to sell them a cask for their 100th Anniversary. As they’re high up my list of favourite distilleries, I was especially happy to find out about their Benromach 2011 10 Years. This should be good!

Nose: Immediately recognisable as Benromach, it has that meaty, barbecued element with maybe some sweet paprika powder sprinkled in. Touches of chocolate, fresh olive oil, malted barley and peanut skins, with just a hint of struck matches, brambles and bacon.
Taste: A spicy arrival (cracked black peppercorns and cloves) with fantastic subtle notes of earthy peat, smoked paprika powder and tobacco, as well as whiffs of peach, dried red fruits, some struck matches and dark chocolate.
Finish: Long with wood smoke, a touch of rubber and lingering spices.

Conclusion
As stated, I love Benromach in general, and my heart says to score this slightly higher, but I have to deduct 1 or 2 points for the sulphuric elements. However, if you usually like their output, the Benromach 2011 10 Years for Van Wees' 100th Anniversary is a can't miss release.
8.7