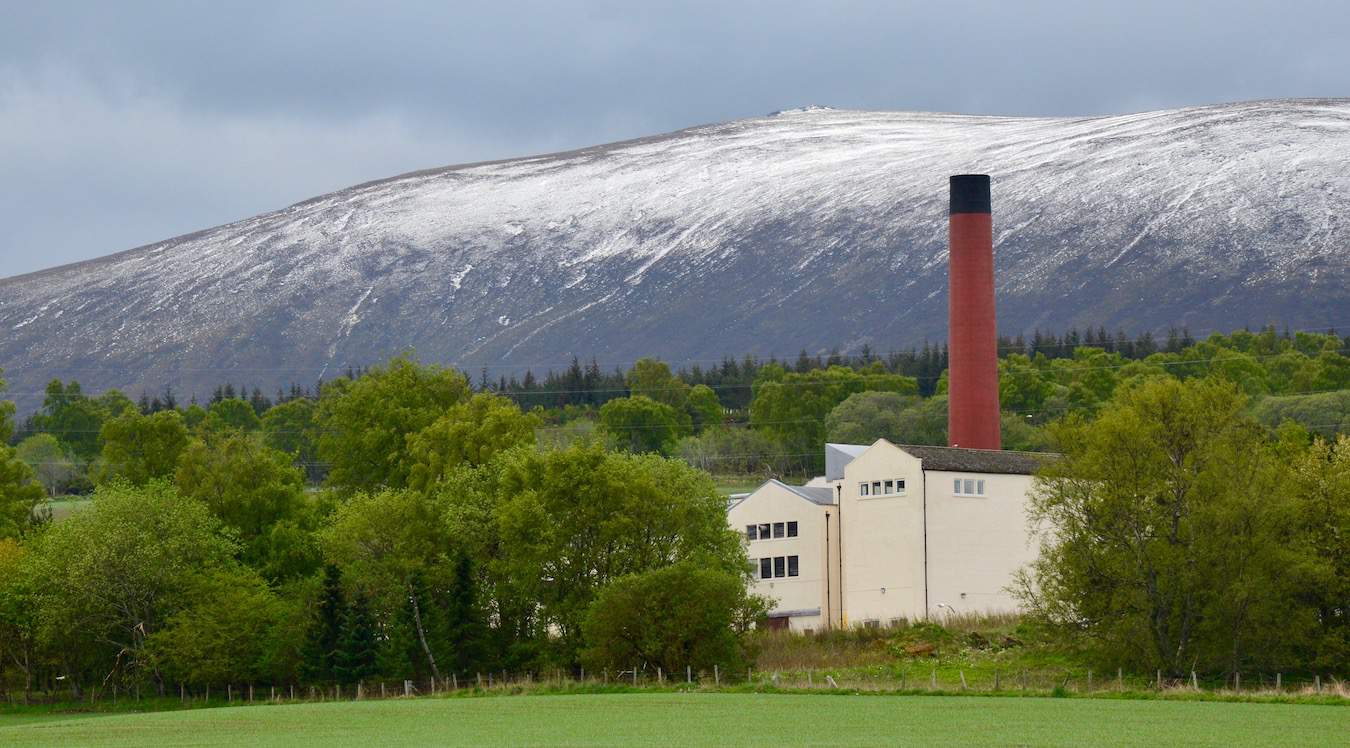 Basically my entire reason for visiting Spirit of Speyside this year, was to visit distilleries that usually aren’t open to the public. Benrinnes is one such distillery. It doesn’t have much of a single malt presence, but it is a respected whisky nonetheless, not in the least because this is a rather big spirit with a sulphury character, and not one of the many bland, inoffensive blend-fillers that don’t have much business being released as a single malt.

The distillery Benrinnes is, obviously, located at the foot of the mountain Ben Rinnes. It’s a stunning location – just look at the picture at the top of this post. Even thought this visit was at the start of May, some snow had fallen just two days prior to my visit, providing the peak of Ben Rinnes with a cold, white blanket.

I arrived about 10 minutes early, and was surprised to find myself the first Festival attendee on site. At most other distillery visits Spirit of Speyside, there were usually other people hanging about before me. I guess people had difficulty getting out of bed on this Sunday morning, which isn’t surprising after a few busy and whisky-filled days.

Since Benrinnes doesn’t usually allow visitors on site, there’s not a reception room of the sort. After walking around for a bit, I hesitantly knocked on a door. Nobody answered. I went inside anyway, went through another door, and walked straight into the offices. Didn’t seem like I should’ve, but turned out I was in the right place.

Andy Hitchcox (I’m not sure I’ve got the correct spelling), the distillery manager, and Mario, an operator from Mortlach who had come over to help out with the tour, welcomed me and pointed me towards the only empty office chair. Already this was such an extremely different experience than all the other tours I’ve ever done.

To be honest, I was suffering from a light case of distillery visit fatigue at this point – this being my fifth consecutive day of distillery visits. Even I can only take so much. The fact that my visit to Benrinnes consequently turned out to be one of my favourite of Spirit of Speyside, is a testament to Andy, whose Birmingham flair certainly lifted me out of my semi-rut, and I expect it did the same for other participants as well. 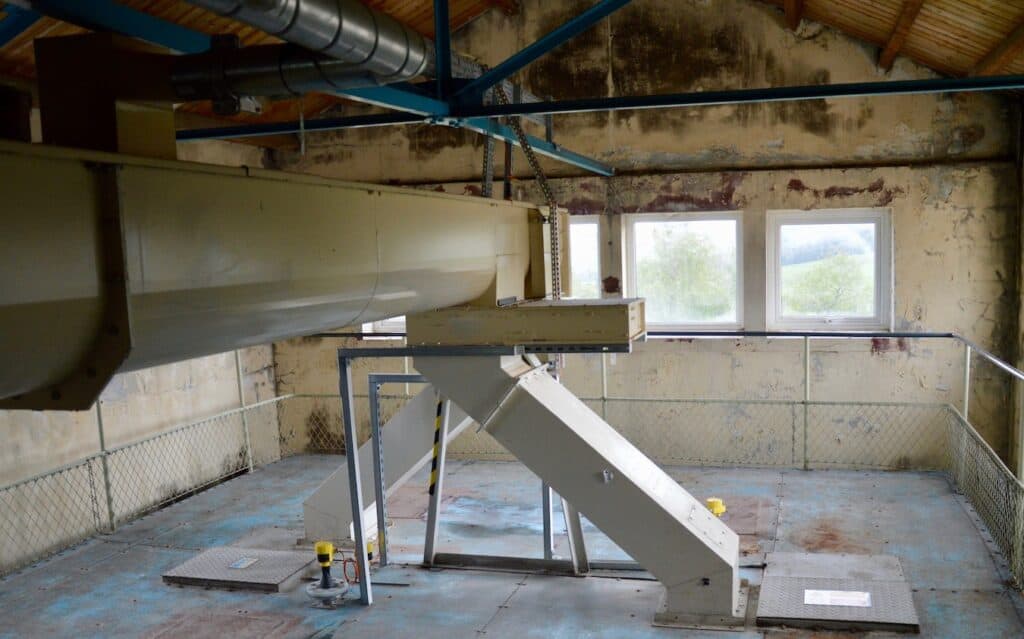 While its location is stunning, Benrinnes is far from a pretty distillery. It was founded in 1829, but not much (if any) of the original structure is still there. After a fire in 1896, it was rebuild completely, and indeed is more reminiscent of Benromach (the maroon coloured chimney helps), a distillery built during the same period.

Our first stop was the malt intake, where Andy commented on the state of the current crop of malted barley, which suffered from the prolonged dry season in 2018. They usually end up producing roughly 420 liters of alcohol out of every tonne of barley, but were down to 406 liters in early May of 2019. That may not sound like much, but extrapolate that to a production 52.000 liters of alcohol per week, and roughly 2,5 million a year, and the difference is significant.

Like pretty much every other Scotch whisky distillery, Benrinnes uses a Porteus mill to process its malt. Nothing out of the ordinary there. The objects that are found in the malt however, will raise your eyebrows. Every batch of malt has to go through a destoner and pass a large magnet, to clear it from undesirable objects. 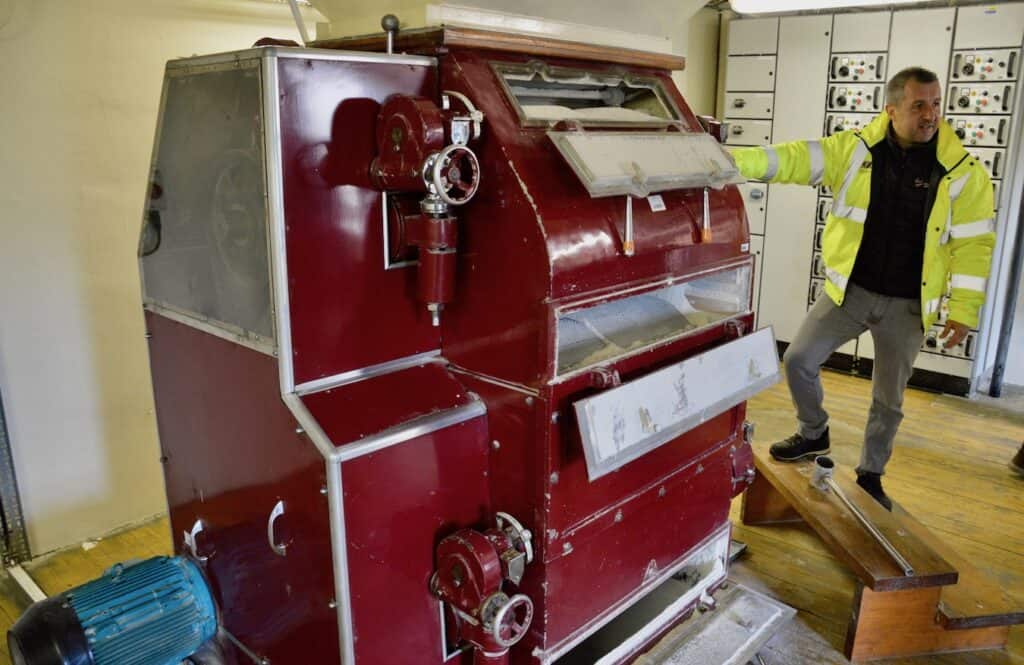 Now usually that means small stones, but sometimes, Andy told us, the distillery crew finds nuts and bolts, lighters, and once even a watch in the malted barley. Upping the ante, the filter used for the process water taken from the Scurran and Rowantree Burns, sometimes prevents frogs and fish from making their way into the distillery pipes. Really, I was as surprised as you are.

Fermentation at Benrinnes takes place in 8 wooden washbacks, each capable of holding about 39,000 liters of wort. There’s two lengths of fermentation applied: 65 hours and 105 hours, depending on wether or not the weekend gets in the way of emptying out a washback. For the shorter ferment about 180 liter of Kerry yeast in added. A little less is needed for the longer ferment, because there’s more time for the yeast to do its thing. 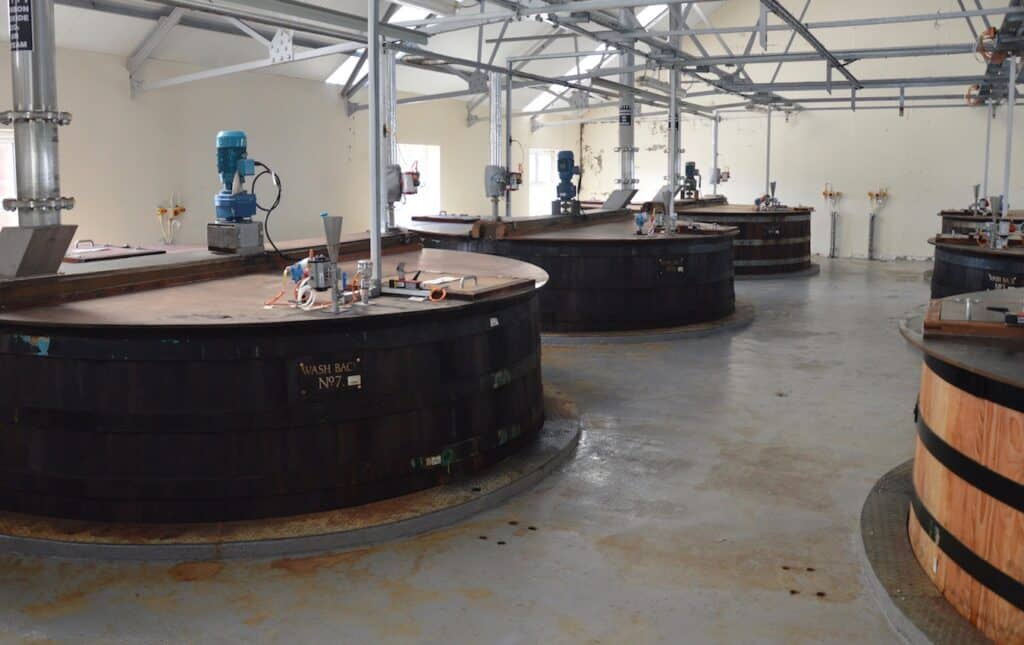 The still house is pretty impressive, and is just a tad different than most that you’ll see in Scotland. There’s 6 stills, but instead of the usual 3 pairs of wash and spirit stills, Benrinnes has 2 wash stills and 4 spirit stills. Up until about 20 years or so, Benrinnes used a somewhat complicated partial triple distillation regime, but that’s no longer the case. Good ol’ double distillation is now common practice.

At Benrinnes, Andy explains, the stills are fired up hotter than usual, as they’re looking for a quick distillation and a fast flow rate. Less copper contact is what they want, aiding that goal of creating a sulphury new make spirit. The worm tubs outside of the still house, used instead of more modern shell-and-tube condensers, sure do help with this also. 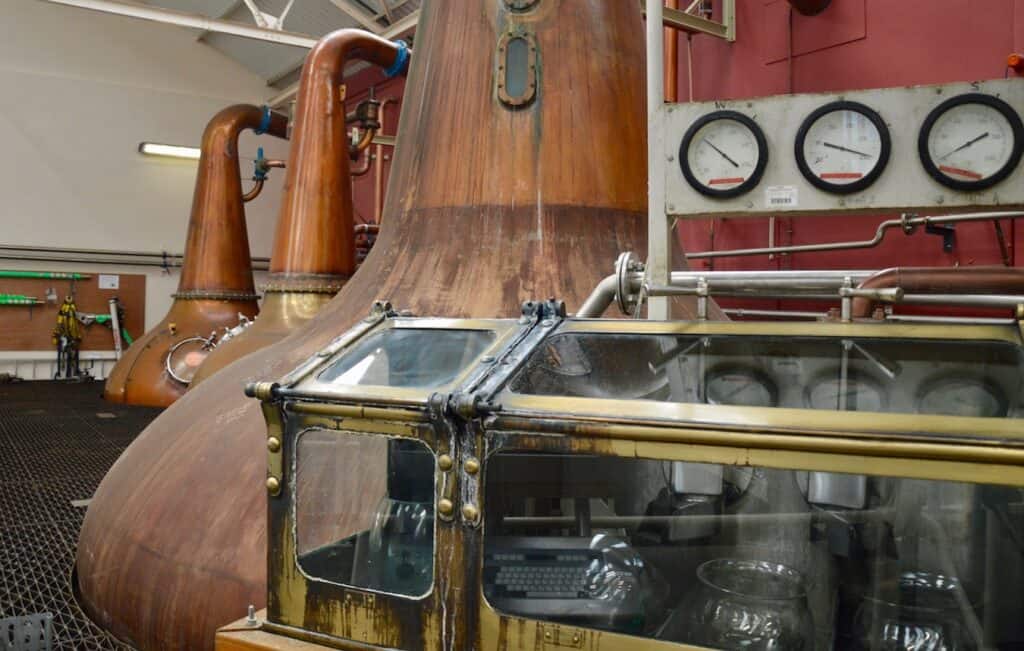 Okay, all fairly straight forward so far. But, did you know that Benrinnes used to have their own maltings? And not traditional floor maltings like most distilleries had back in the day. No, Benrinnes used Saladin maltings up until 35 years ago. Saladin maltings allow for much deeper malting beds than your run of the mill floor maltings (and thus larger capacity), but have since been overtaken by drum maltings, which is the technique used by most commercial maltsters.

I had never seen Saladin maltings up close, and I’m not sure if there’s one in working order still. At Tamdhu maybe? Anyway, the Saladin boxes at Benrinnes were opened especially for the festival, as at this point it basically is a derelict building. A few lights were installed by the Benrinnes crew so that visitors actually could see something. It made for quite an eery experience, like being in an abandoned warehouse somewhere in East Berlin, the kind of stuff you might see in horror movies, where you expect some slasher type to jump out of a dark corner. It was like a Doomsday decor.

A chalkboard signed by all the former employees of the maltings was incredible. “Fini”, one of them had written over three decades ago. And the chalkboard, nor the maltings, have been touched since that moment. I’ll leave you with a few pictures of the maltings. Incredible stuff.