The whisky world is welcoming and inclusive, and becoming increasingly smaller. Not smaller in a literal sense, as I feel the interest in whisky is still growing, but definitively smaller in a figurative sense. Which I guess is the case for our world as a whole. I’m only 34 years old, but the technological advances I’ve seen in my relative short time on this earth are crazy. They’ve surely contributed to that smaller whisky world I’m talking about.

This blog for instance, while certainly not the biggest whisky blog in the world, has a loyal readership from all over the world. My Instagram account is almost a separate entity, and quite a few people follow me there. I reach a global audience from a small city in the East of the Netherlands. I don’t often give it much thought, but that’s actually really incredible.

Yet, it’s still surprising to me when someone has actually heard of Words of Whisky. One such occasion happened during the Whiskybase Gathering. Out of nowhere I was approached by Anatoliy, who asked if I was ‘@officialwordsofwhisky’ (my Instagram handle, as someone has already taking @wordsofwhisky). Surprised by the question, I answered in the affirmative.

Anatoliy, almost giddy at my positive response, walked back to a table where his wife was sitting, grabbed a few samples out of his backpack and proudly presented them to me. 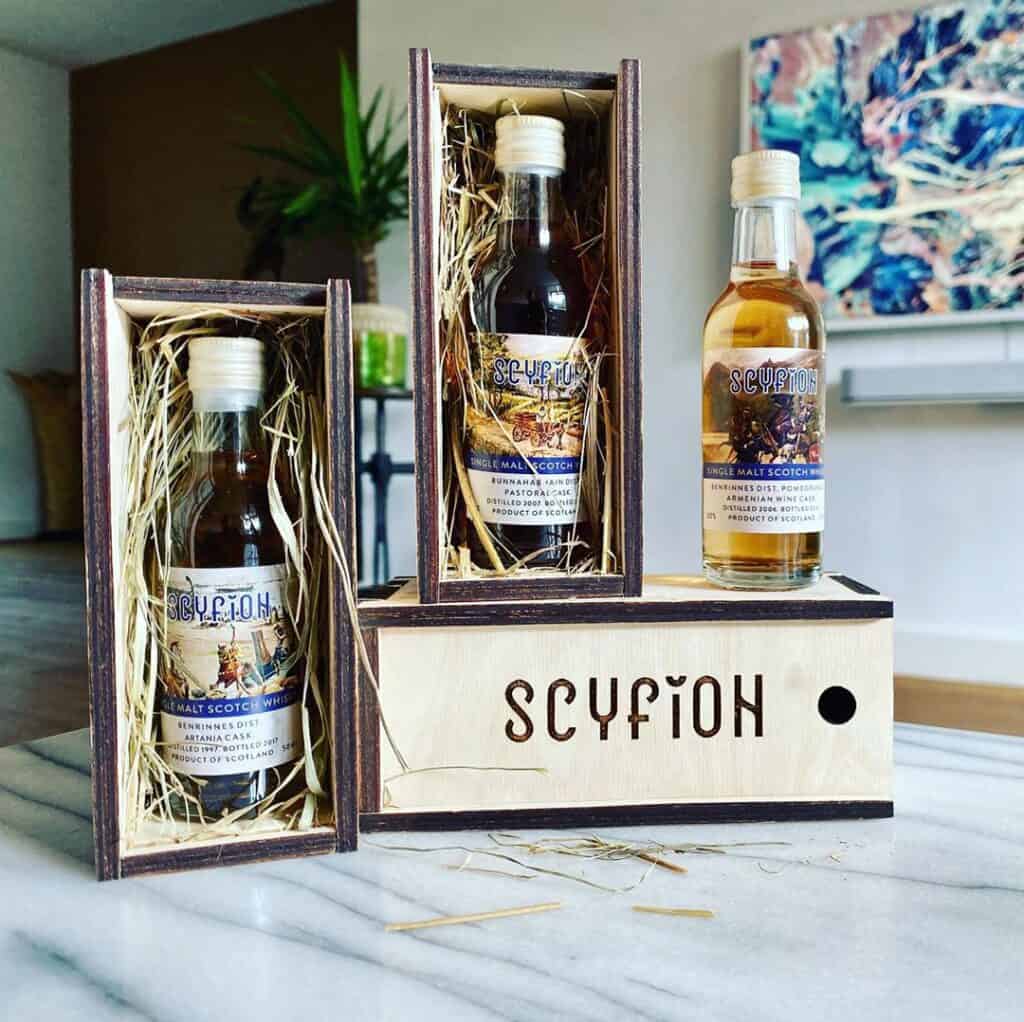 I joined him and his wife for a quick talk, still kind of wondering what was happening here, as Anatoliy acted as if he’d just shaken hands with Michael Jackson (the late whisky writer, not the musician of course). He talked enthusiastically about the samples he had just handed over.

From the picture above you can see lots of thought and effort had gone into these. Anatoliy explained that he is involved with Scyfion, an independent bottler from Ukraine. The name Scyfion is a combination of Scythian (an ancient civilization that used to populate Ukraine) and Fion (gaelic for wine). It is a very obvious hint to the philosophy of this bottler.

Scyfion finishes all their whisky in wine casks. Not just any wine casks though, as all of them are very specific to Eurasian wine regions. For instance, the Benrinnes 2006 I’m reviewing was finished in former Armenian Pomegranate wine cask, while the Benrinnes 1997 spent time in an Artania red wine cask, which is a wine made in the Odessa region (as far as I can tell).

Anatoliy certainly was able to convey his enthusiasm to me, and his positive attitude makes him one of those people that you immediately like. And this is the cool thing about the (whisky) world today — I get to meet people that I otherwise never would’ve.

Nose: There’s an interesting buttery sweetness here, accompanied by brown sugar, but also lots of orchard fruits, followed by hints of fresh strawberries and brambles. Finally there’s a more candy-esque sweetness here as well, fruity bubblegum type aromas.
Taste: Oily and viscous, with hints of coffee and leather, but also lychee and bubblegum, as well as figs and dates. Soft spices also. Less wine-y and better integrated than I expected, although not a complete success.
Finish: Lingering cracked black peppercorns with a touch of lychee, before the orchard fruits start kicking in. Long.

Nose: Old oak with varnish and furniture polish, but also apricot, gooseberry and sultanas, as well as a hint of fudge. A touch of olive oil and straw, as well as lemon peel and orange marmelade. The balance is intriguing.
Taste: Fresh with subtle spices (white pepper, ginger) and lovely fruity flavours, like apple juice and bitter lemon peel. The wine cask influence must be fairly minimal, as this seems mostly prototypical Benrinnes. It has a thick mouthfeel, only adding to the pleasurable experience, and plenty of character.
Finish: Lingering spices and soft fruits. Long.

I had no idea what to expect, and wine finishes usually do make me skeptical of whisky, but I’m quite taken by both these Benrinnes. They’re very different, as one is more of a classic example of what mid 90s Benrinnes can be, while the other is much more about the wood influence.

Thanks so much, Anatoliy! Also, if you want to read an interview with him, check this out.