Ben Nevis has a reputation for being a love it or leave it kind of whisky. This is the first Ben Nevis reviewed on Words of Whisky, but I’ve had a couple more. So far I seem to be more of a leave it kind of guy. I’m still looking for that one Ben Nevis that convinces me that this is a distillery that can produce great whisky. Maybe this 1997 vintage from German indie bottler Maltbarn will be the one to do it. 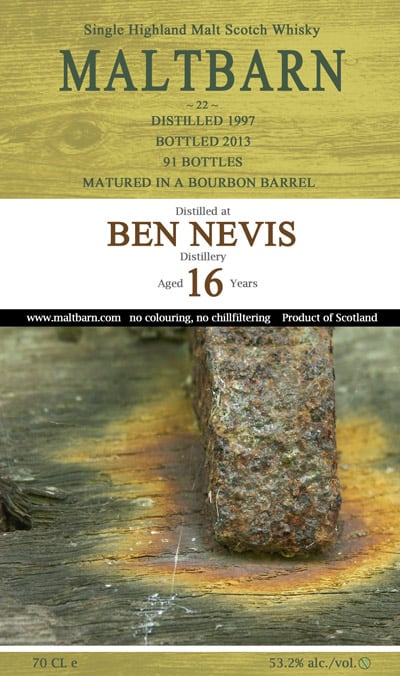 Nose: There it is again, that strange quality I’ve detected in other Ben Nevis as well. A sort of metallic/sour note, I don’t know how else to describe it. Luckily it disappears after a while and apple juice or cider appears, as well as some melon. It is also a bit farmy, some wet hay. Let’s just call it a ‘special’ nose. Not necessarily a compliment.
Taste: Pink grapefruit, oaky. Vanilla and bananas too. Some pepper and do I taste coffee?
Finish: The best part of this whisky, for sure. It’s long with an oaky sweetness. Oh, and some pear and melon.

I don’t know. It is a good whisky, but not really my cup of tea. This one from Maltbarn is fair priced at 75 euro. Still available here.

Next
How To Annoy Whisky Drinkers