Dramtime is a Dutch shop (they also have webshop) and when I ordered a couple of Benromach 15‘s not too long ago, they also sent me a sample of their own bottling, a 14yo Auchroisk. I’m not very familiar with it myself, and Auchroisk is not a very sexy name in whisky. It is a very young distillery (1974) and owned by Diageo, which means that most of their output goes into blends, namely J&B.

Official bottlings are rare, but indie single casks pop up every now and then. This 14yo from Drams by Dramtime has matured in a refill sherry hogshead.

Nose: Little bit dusty with pepper and oregano in the background. Some cumin also. Pretty spicy dram. After some time the sweeter sherry notes appear. Cherry candy and exotic fruits. Chestnut also.
Taste: Strawberries and raspberries. A fairly dry mouthfeel. Wood shavings. Some spices as well, nutmeg and pepper, although they never overpower the sweeter fruits.
Finish: The wood spices keep lingering for some time. Hint of sweetness.

A proper sherried whisky, although not a true sherry bomb. Not too complex, but the balance between the sweetness and the spices is good. Still available. 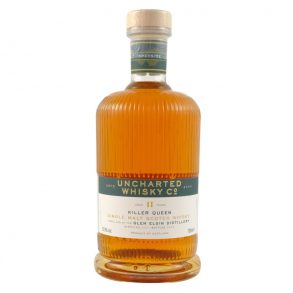