As Isle of Arran Distillers now have two distilleries on the island (Lagg Distillery opened in 2019), they’ve started to refer to their original Arran distillery as Lochranza. They’ve been doing so for a while now, but it still feels unnatural to me. Luckily, their brand name is still Arran Single Malt, so I feel no qualms simply using the original name of the distillery. That’s what the independent bottlers do too, by the way, as evidenced by today’s review.

I’ll be taking a closer look at the 8th single malt whisky released by The Fisherman’s Retreat, an Arran 2013 7 Years fully matured in a Yalumba Viognier white wine cask. This is not the first release of theirs I’m reviewing and they seem to have a fondness for maturation in wine casks. It’s also not the first time they’ve released a single malt from Arran matured in a wine cask from Yalumba.

Yalumba is a winery in Australia and they also supply Australian distillery Starward with casks, including for their excellent Tawny expression. As it stands, finishes in wine casks are far from a rarity nowadays. But distillers usually opt for red wine casks or former fortified wine casks. However, when it comes to The Fisherman’s Retreat latest Arran, they’ve chosen a white wine. That doesn’t happen often and to be honest, I can’t remember if I’ve ever tasted one.

The Fisherman’s Retreat has picked a Yalumba Viognier cask. Yalumba is known for championing the Viognier grape. This variety almost went extinct in the 1960s. At the time there were just 11 hectares of Viognier in Condrieu, in the northern Rhône. Yalumba planted Australia’s first commercial Viognier vineyard in 1980.

Viognier is usually a dry, medium to rich white wine. Some would describe it as similar to Chardonnay. While I’m in no way qualified to talk about wine in-depth and have never actually tried a Viognier white wine, I would absolutely believe you if you would’ve told me this Arran had spent some time in a Chardonnay cask.

Nose: A touch of copper coins and some soft yeasty notes, with just a whisper of burlap. Mostly gentle white wine notes though. Apricots, white flowers and a whiff of butter, but also lychee.
Taste: Sweet vanilla, melted butter and a creamy mouthfeel. Somewhat floral and with plenty of peaches and apricots, but also a distinct note of lemon pith and ripe grapes. A small pinch of white pepper.
Finish: Sweet and fruity. Crème brûlée and sprinkles of lemon zest.

The wine is strong in this one, almost to the point of overpowering, but bottled at probably just the right time. Available from The Fisherman’s Retreat.

There was also a version bottled at 60.4%, but only 48 bottles were available and all are sold out. To be honest though, I doubt that one’s much better than the version I tried today. Similar to how I liked this Caol Ila slightly more at a reduced strength.

Sample provided by The Fisherman’s Retreat 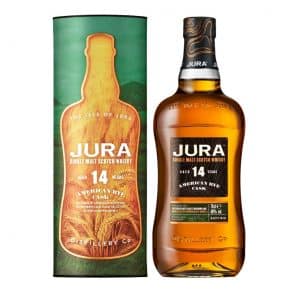