The Arran 18yo is the third in a trilogy of releases starting with the 16yo in 2013, and is part of their Pure by nature-series. Only 9.000 bottles were released. I was selected to take part in a Tweet Tasting, which meant I, along with about twenty other people, received a couple of samples from Arran. We tasted collectively on April 22nd, and consequently spammed a lot of peoples timelines. The new 18yo was also part of the samples sent by Arran. Here are my notes.

Nose: Matured in ex-sherry casks, I’m guessing most of ’em have been refill and/or American white oak. Fairly intense vanilla and a sugary sweetness, with golden syrup and custard as well. Exotic fruits like peaches and mango, but also green apple. Very well balanced and integrated.
Taste: A bit spicy on the arrival, nutmeg maybe. Green apple, apfel strudel and some butterscotch. Light caramel, green tea. Some tannins as well, so slightly dry. Mouthfeel is a bit flat. I like my whisky oily and thick, the opposite of watery. This one is a bit in between.
Finish: Impressively long and drying with a lot of the same flavors returning. Mainly apple and golden syrup, but green tea as well.

A very well crafted whisky. Not your typical sherried whisky. Light and subtle, and very clean. 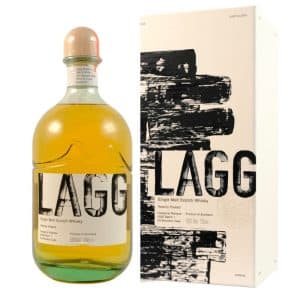 Next
Oban ‘Available Only At The Distillery’