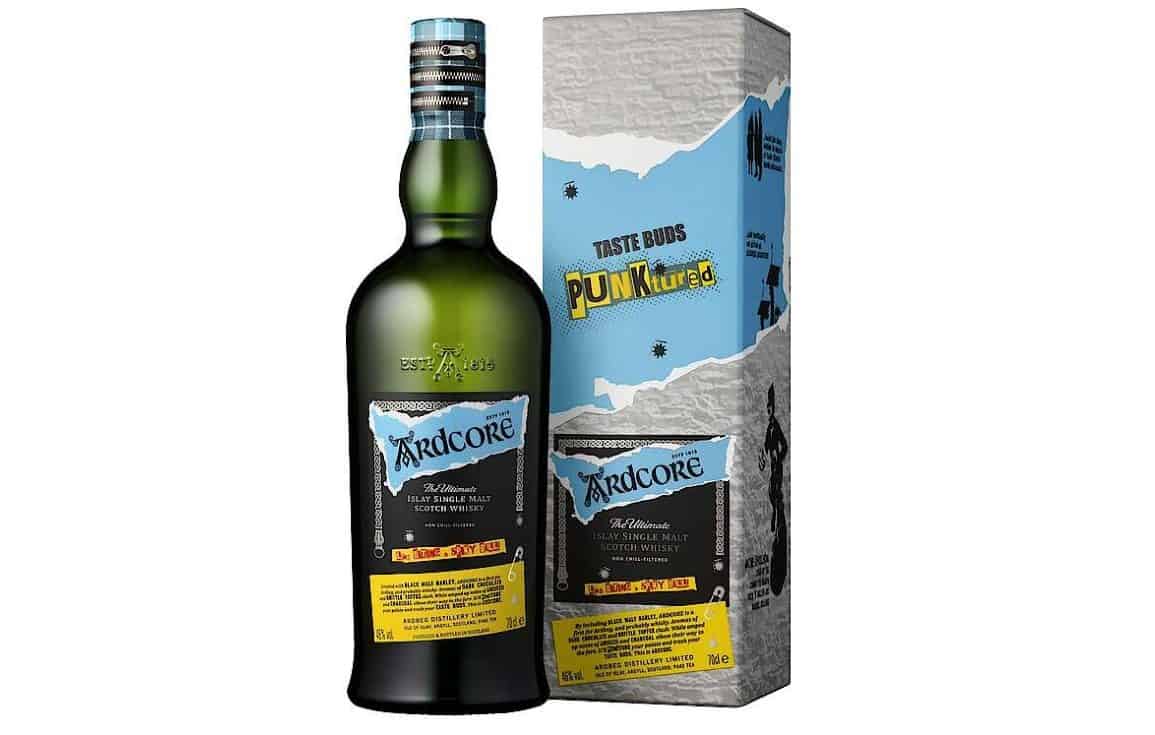 Islay distillery Ardbeg has revealed the new limited edition Ardbeg Ardcore to celebrate Ardbeg Day 2022 and this year’s Fèis Ìle festival. It focuses on the alleged punk rock past of Islay. The new Ardbeg Ardcore will go on sale on April 26th (Committee Exclusive), while the general release will be available from May 17th on Ardbeg.com.

Ardbeg Ardcore (which sounds like a French person trying to pronounce “hardcore”) is a no-age-statement single malt Scotch whisky made from dark roasted malted barley. For the first time in three years there will be in-person festivities at the distillery during Ardbeg Day on June 4th, but there will also be online activities and events worldwide at Ardbeg Embassies. Fans traveling to Islay can look forward to “rocktails, a tattoo parlor and live punk music.”

“This year will be my first physical Ardbeg Day,” said Colin Gordon, who was appointed as Ardbeg’s distillery manager in August 2020. “We know not everybody can make it to Islay, so we’re delighted to be broadcasting all the day’s antics online too. Whether at the distillery or at home, we hope lots of you rock up, punked out and ready to party come 4 June.”

LVMH’s marketing department has gone to great lengths come up with a marketing story for the Ardbeg Ardcore, this time focusing on brand’s alleged punk past, with Islay’s main port, Port Ellen, going by the nickname ‘Punk Ellen’ in the 1970s. I can’t say I’ve been able to verify this little scrap of information, and it’s probably based on something obscure. At the very least I think we can agree Islay was never a hotbed for punk rock. However, there is something called The Ardbeg Song (!) from a Danish punk rock band.

Ardbeg’s head of distilling and whisky creation, Dr. Bill Lumsden, decribes the new Ardbeg Ardcore’s flavour as tasting “like biting on a spiky ball.” So, no thanks, I guess?

He elaborated saying: “Ardcore is a dram that wears its heart on its sleeve – its black heart! Created with roasted black malt, burnt to hair-raising levels, this spirit is all about substance. Notes of charcoal and sweet smoke make for an in-your-face nose, while potent notes of aniseed and dark chocolate stamp this bottle out as one fit only for the most Ardcore of fans.”

Nose: Showing spicyness, Ardcore celebrates a veritable moshpit in the glass with nuances of marmite, charred toast and black chicory coffee. Like a safety pin in the nose, the typical Ardbeg herbal notes are present, while smoky notes of blazing campfire and molasses buzz in the background.
Taste: A stunningly spicy and fiery taste ignites with more rich and smoky flavours. Cocoa powder, dark chocolate, peanut toffee, smoked lime and hints of soot and campfire embers in unison. Anise and malt biscuits come to the fore and rivet through all taste buds.
Finish: All in all a sweet finish. Long-lasting notes of toffee, soot and smoke provide an anarchic, exquisite aftertaste.

Earlier this year Ardbeg releases the 13-year-old Fermutation, which is made using the longest fermentation in the distillery’s (modern) history.