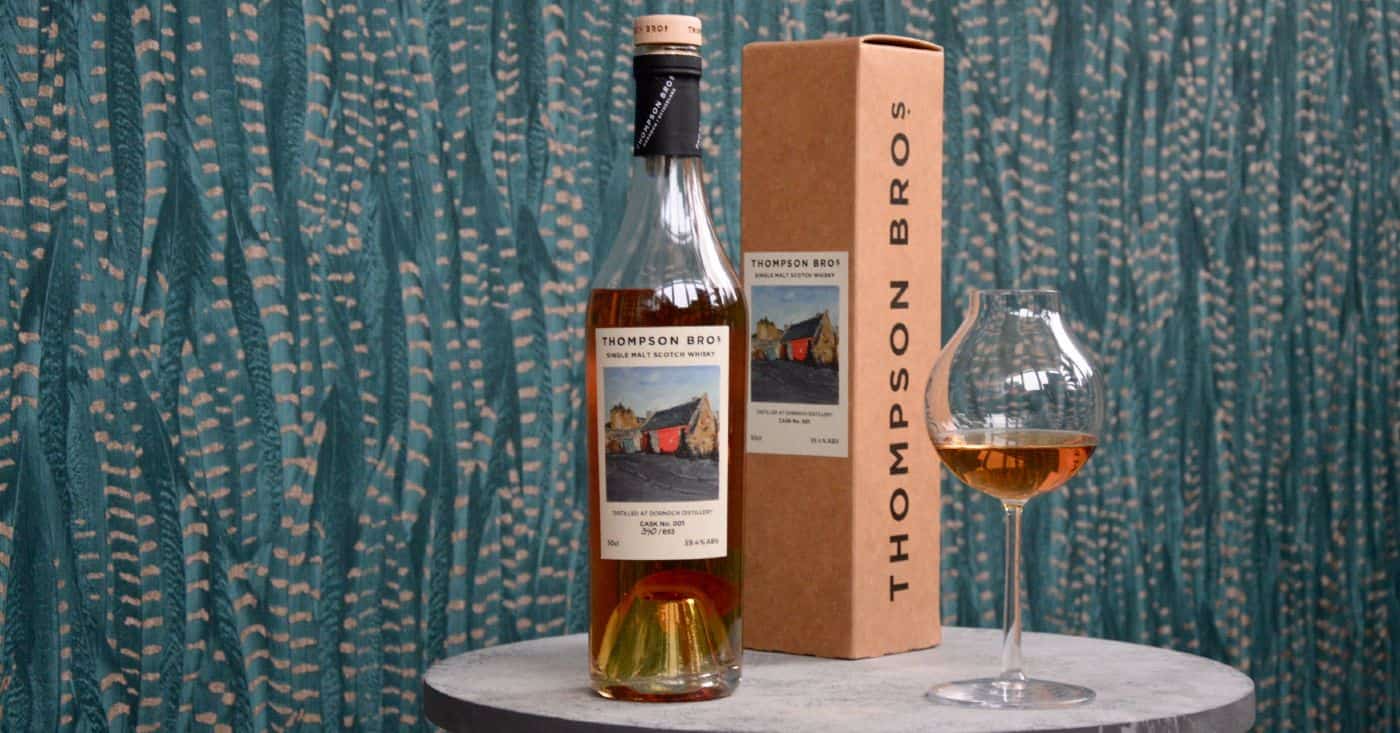 Seven years ago today I started this blog. I’ve celebrated anniversaries with some interesting drams over the years, but it seems this one might top them all. Right on cue, Dornoch Distillery released Cask #1, one of the most anticipated inaugural releases in recent memory—rivaled only (in my mind) by Waterford’s 1st Cuvée Pilgrimage.

Dornoch Distillery is the brainchild of brothers Phil and Simon Thompson. They made a name for themselves with their unequaled whisky bar, part of the Dornoch Castle Hotel, which is probably my favourite place to stay in the whole of Scotland. Not just because of the bar, since the town is also in one of the most beautiful spots and surrounded by a few big name distilleries, like Clynelish and Brora.

Dornoch Distillery was founded in 2016 and the first cask was filled in 2017. Because of the whisky bar and their network within the world of whisky, Phil and Simon have a large frame of reference of what they consider the best whisky ever made. Before starting their own micro distillery in a former fire station adjacent to the hotel, they gathered research on the methods and materials used to produce these whiskies. That led to hypothesis, which they’ve put to the test since.

“People often focus on the stills, the water and the barrels”, Simon told me previously. “But for me the most important element of whisky production is the selection of yeast and barley variety, malting conditions, mashing and fermentation regime. When we distil, we transform and extract the essence from the wash. Making a great wash is the place to focus our attention. Distillation is easy as long as you don’t rush, pay attention and trust your senses.”

And so they went to work. Over the years they’ve experimented with many different (wild) yeast types. “We do all of the propagation work in house”, says Phil. “The result is a large catalog of new make made with different yeast varieties—there are massive differences between them all. We start with such wonderful barley, rich with natural oils and protein. Using, by industry standards, relatively passive yeast allows us to retain a lot of those flavors from the oils and protein in the barley. During the fermentation we allow the yeast to develop new flavors as well as malolactic fermentation to take place.”

Dornoch Distillery Cask #1 is made from Plumage Archer, a historical barley variety first bred in 1905. It was created by crossing Plumage, a Danish landrace, with Old English Archer. Plumage Archer was an important malting barley during the 20th century, but is barely used anymore. Fermentation took over 7 days in open top oak washbacks, aided by brewer’s yeast.

While Phil and Simon clearly put a lot of their focus on the processes before distillation, they also chose a rare type of cask for their first release. It’s an ex-Oloroso cask made from American oak, which is quite common. But what makes this one unusual, is that it used to be a solera cask. Not many of these casks are available to the whisky industry, as sherry bodegas usually don’t get rid of them since they’re an important part of their ageing system. Usually, solera casks are often only acquired when a bodega goes out of business.

The inaugural release from Dornoch, a craft distillery run by respected industry figures, is clearly a prime victim for investors and flippers looking to turn a quick profit. With just 893 bottles available, a ballot was the only fair way of distribution. The Thompson brothers have instituted as many safeguards as possible to prevent their whisky from falling prey to greed. Whoever does decide to put their bottle up for auction, will be banned from buying subsequent releases.

Nose: A touch of aceto balsamico and crème de cassis combined with cocoa powder, rum raisins, sultanas. Strong notes of dried oats and barley husks, with a whiff of rhubarb and warm apple compote as well. Finally, just a whisper of melted butter, chalk and cinnamon. Really rather impressive.
Taste: Super creamy mouthfeel. Lots of chocolate truffle on a backbone of gentle cracked black pepper and potent notes of raisins, with a touch of roasted marshmallow. Some subtle notes of peanut skin in the background. Water activates the oak tannins.
Finish: A tad drying and lingering spices with a whisper of rye bread. Finally a touch of tobacco leaves and a slight ashiness. Medium in length.

Impressively, there’s pretty much nothing to fault here. Dornoch Distillery’s inaugural release is objectively excellent. It offers complexity as well as balance, and I almost went up to 90 points, but I must leave something to strive for. Scratch that, what nonsense am I talking. That’s a BS reason, so 90 points it is.

I’ll admit the influence of a true solera cask is something of an acquired taste (which I love). Most Scotch whisky drinkers won’t have tried many examples of this style, because pretty much all sherry matured single malt comes from seasoned casks specially prepared for the whisky industry. Whisky drinkers from the the Netherlands might be more familiar with maturation in solera casks, as Zuidam Distillery exclusively uses these types of sherry casks.

The cask influence on Dornoch Distillery’s Cask #1 is far from negligible and has had a serious impact on the spirit. That only makes me all the more curious to try Dornoch single malt that has matured in other, more common cask types. For example, how does it behave in an ex-bourbon cask, be it first-fill or refill? I can’t wait to find out.

It was never really in question, but I’m glad I opened my bottle and I truly hope to see many more corks freed from their necks. I might not have won a golden ticket, but Dornoch Distillery’s whisky is a great reward in itself. Congrats to Simon, Phil, Jacob, Vhairi and Euan on such a remarkable first release.