Time goes by quickly here at Words of Whisky HQ. It has already been a year since my first blog post. It’s been a fun ride so far, and I plan on drinking whisky and blogging about it for a very long time. And to celebrate the one year anniversary of Words of Whisky I’ve treated myself to what a lot of people consider to be the holy grail of whisky: Port Ellen. Two different single cask bottlings, both of which have matured in sherry butts. One from Douglas Laing and one from Wilson & Morgan. Here are my tasting notes.

Nose: Starts of with some wet cardboard, but that quickly changes into salt and white pepper, also some roasted peanuts. Now the fruitiness appears, with mango, melon, banana and oranges. The peat is fairly subtle, with some rubber and a hint of iodine. Slightly metallic. The sherry influence is minimal.
Taste: Salty and nutty with some citrus, lemon and candied oranges. More peated than the nose suggests, with a nice smokiness surfacing. Still not very dominant though. The palate is drying, and shows some honey and caramel as well.
Finish: Pear, peat, salmon and pepper. 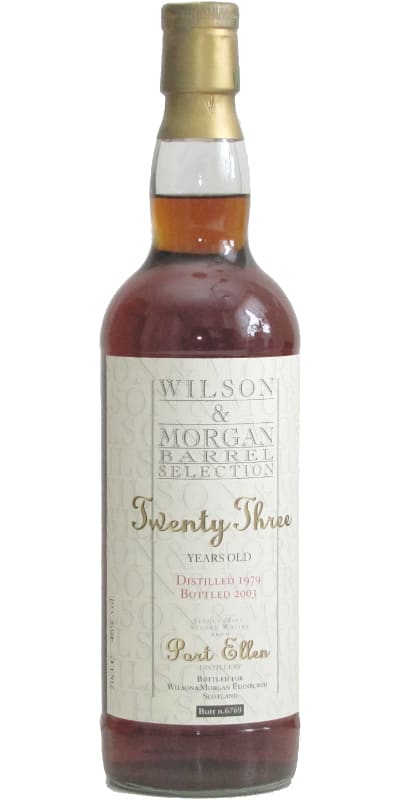 Nose: First a layer of salted crackers, dried seaweed and coastal spray. Then a sort of fresh sweetness becomes apparent, with lots of cherries. The peat stays very much in the background, just how I like it. Now some heavier, darker notes with leather and tobacco. The nose is also a bit dusty, and shows some rust, in a good way, if you can believe it. And then it changes again, with the sherry really shining through. Fudge, salt water taffy, caramel and soy. Incredibly complex and balanced.
Taste: There’s the salt again, accompanied by some oak and wood shavings, but also pickled salmon. It is dry at times and there is black pepper influence. The sherry is not as present here.
Finish: Ash and charcoal. Cherries, black pepper again. Salty and dry.

A clear winner here. The Douglas Laing to me represents a very good peated whisky, but not something you would call legendary, and not something that is worth what you pay for Port Ellen nowadays.

The Wilson & Morgan is from a sherry butt that has been much more active. The nose is absolutely brilliant. Based on that alone I might’ve rated it 94, something I’ve never done before. But the palate and finish have to be taken in account as well, and those are excellent, but nowhere near brilliant. That’s why the score is a bit lower. Still fantastic though 🙂

Thanks to Edwin for the W&M-sample!