I can’t believe this is the first ever anCnoc I’m reviewing on Words of Whisky. I know I’ve missed a distillery here and there, that’s fine. I’m not a completist. But anCnoc is a seriously good malt—and underrated too! With reviewers like me ignoring anCnoc, it is sure to stay that way. I’m baffling myself here, because I really like their whisky.

The brand anCnoc has been around since the late 1980s or early 1990s. However, the history of the distillery where it’s produced, Knockdhu, goes back much further. In 1877, six of Scotland’s largest grain distillers joined together to form Distillers Company Limited (DCL), the company that would eventually become Diageo well over a century later. Among those grain producers were Carsebridge, Cambus and Port Dundas. Some years after, DCL moved to built a distillery just outside of the village of Knock, not far from Keith. In 1893 the first bricks were layed and in the following year production started at Knockdhu distillery. 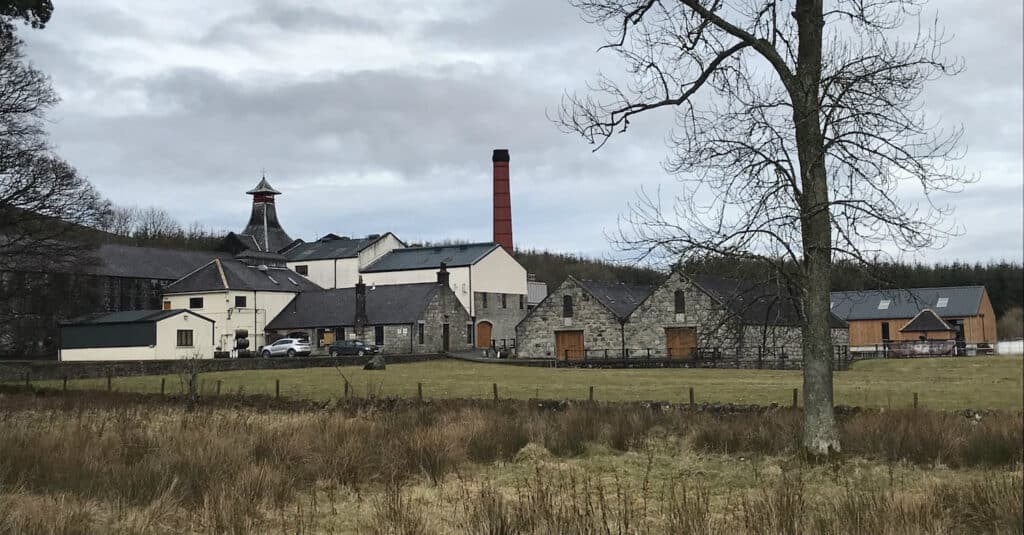 Fast-forward to 1988. Knockdhu has fallen victim to the whisky crisis of the 1980s. It almost joined the ranks of Brora, Port Ellen, Convalmore and the likes, but Inver House swooped in, bought the distillery from DCL and revived it. Promoting it as a single malt was high at the top of the list, but the new owners felt the name sounded to similar to Knockando, a Speyside distillery that already established itself as a whisky brand. To avoid confusion, Knockdhu became anCnoc.

I visited Knockdhu in 2018, and it is one of the best experiences I’ve had at a distillery. I was shown around by the most knowledgeable tour guide I’ve ever met. Any questions she couldn’t answer (and there were barely any) were answered by distillery manager Gordon Bruce after the tour. Outside of the warm welcome and hospitality, Knockdhu is a fascinating distillery with lots of little deviations from the norm, in large part because Bruce is always trying to find ways for Knockdhu to be more eco-friendly. Knockdhu is not far outside of Speyside—give them a visit if you’re ever in the area.

As mentioned before, anCnoc is not a well-known brand. Among their Inver House brothers and sisters, Old Pulteney and Balblair far outshine anCnoc. You can even argue that Speyburn is a more familiar name. Considering the quality coming out of Knockdhu, I’m not sure why that is. I do know that this brand deserves your attention. I’ll be sure to give it mine, starting with the anCnoc 18 Years Old.

Nose: Earthy at first, highlighted by a subtle mushroom aroma, but also hints of polished leather, followed by honey-glazed almonds and smoked paprika powder. There’s a touch of banana custard and menthol as well.
Taste: Lovely stuff and very well-rounded. There’s a hint of dark caramel, honey and chocolate, accompanied by soft spices. Some dried apricots and dates as well. Impressive.
Finish: Notes of charred oak and a whisper of smoke. Medium in length.

A very good whisky that deserves a bigger audience. Go out there and give anCnoc a chance!