There are only a few distilleries truly known for releasing sherry matured whiskies, and Aberlour is certainly one of them. Their entire core range is highlighted by sherry influenced drams, with the Aberlour a’bunadh probably the most well-known example.

While you don’t encounter many Aberlour whiskies from independent bottlers, the distillery itself does release single cask bottlings every once in a while. They do this mostly in collaboration with a third party, in this case La Maison du Whisky, the French retail outlet and importer.

Today’s particular release is from ten years ago already, so the whisky for this was actually distilled in the early nineties. It is a Double Cask whisky, meaning it matured both ex-bourbon and ex-sherry casks.

I’ve no idea for how long it matured in sherry casks, but judging by the aroma and the flavours, it was a considerable amount. I don’t think anyone tasting this blind, would guess this to be anything else than a big time sherry bomb.

Nose: Dark and rich sherry notes. Plenty of cocoa powder and dark chocolate, with hints of balsamic and aniseed. It has a damp earthiness to it, as well as hints of leather. Very intense, yet balanced, but not extremely complex.
Taste: So very creamy and chewy, I love it. Is this really almost 60 percent? This is exceptional! Sweet, but not too sweet. It is dry, but not too dry. Some mild spices, mainly cloves and black pepper, but dried red fruits are the main attraction here. The supporting cast exists of chocolate praline, leather and mild tobacco notes.
Finish: Lingering spices, before the red fruit takes over.

Incredibly mature for a 14-year-old whisky. I thought the nose was good, albeit a bit pedestrian. The palate however, it shows a maturity and balance rarely achieved in whiskies this age. Outstanding! 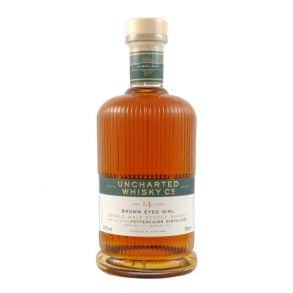