Pilgrimage To The Scottish West Coast Isles (Part I)

In the first week of June 2014 I went on a sailing trip to the isles on the Scottish west coast. What follows is Part I of my travel report. The reason I waited this long with my report, is because this story was first published in the final issue of 2014 of Dutch magazine Whisky Passion.

Campbeltown is beautifully situated in a picturesque bay on the peninsula of Kintyre. It’s typical Scottish weather when we arrive in the former whisky capital of Scotland. Nothing but grey skies, a light drizzle and the sun is nowhere to be seen.

Today is day two of the sailing trip to the Scottish west coast isles, organized by Whiskybase. Grant Macpherson, Cadenhead’s whisky-manager, is leading our group of sailors – mostly comprised of Dutchmen, but there’s also a Brit, a German guy, two Frenchmen, someone from Denmark and a Canadian-American – to Springbank. He opens the doors of a run-down building. “Be careful”, he says. “Stay on the paved parts. The rest of the floor is covered in mold.” None of us really listen to what Macpherson has to say. The whisky treasures of Cadenhead’s Warehouse #9 await.

Islay could comfortably be described as a Mecca for whisky lovers. Which makes it understandable that the guys from Whiskybase – the online database, webshop and whisky store in Rotterdam – organized a trip to the small island just off the Scottish west coast. As a sort of bonus (which is quite the understatement), we would also be visiting Campbeltown and the Isles of Arran and Jura.

But Islay was unmistakably the crowd puller of this trip, even for whisky lovers without a clear preference for peated whiskies, like myself. There is something magical, almost mythical about Islay. The island only has about 3.500 inhabitants, but it counts eight distilleries. A ninth (Gartbreck) will start distilling at the end of 2015. And Islay is also the former home of Port Ellen, the legendary distillery that closed its doors in 1983.

The tall ship Thalassa was our main form of transportation for the trip, which started in Troon, a small coastal city south of Glasgow. It took about half an hour by train to get there. The three-master ship was impressive, to say the least. When me and my mate arrived at the Troon train station, we could already see it in the harbor, which is almost two kilometers away. The highest mast reached to about 35 meters, high above the low-rise buildings of Troon. On board are fifteen two person cabins, an industrial kitchen, a dining room and a salon with a bar. But the most imposing part of the Thalassa are its massive sails: sixteen in total, spanning over 800 square meters of fabric.

The Thalassa also comes with its own supply of whisky, but it’s not much. Luckily this was anticipated. Everybody brought at least one bottle to share. One traveller brought an unopened bottle of Bowmore 100 Degrees Proof, another pulled an already opened Glen Albyn 1974 from his suitcase. And there were also some Archives-bottlings of course, Whiskybase’s indie label. I brought a young Ledaig from the Creative Whisky Company, which was hugely disappointing. Ah well, you can’t have it all. All in all we had a quality collection of about forty bottles. As it turned out, that would be just enough to make it through the week. Not much was left at the end of the trip.

At its peak, Campbeltown was home to over thirty distilleries. Nowadays only three are left: Springbank, Glengyle and Glen Scotia. Usually it’s not possible to visit one of these on a Sunday, but whisky-manager and guide-for-a-day Grant Macpherson made an exception for us. He sacrificed his day off to open the doors of Springbank and Glengyle.

Both distilleries are owned by J & A Mitchell & Co., who also own indie bottler Cadenhead. The differences between Glengyle and Springbank are vast. One just has to look at the founding date to get an idea. Springbank started distilling almost two centuries ago, in 1828. The current Glengyle distillery (there used to be another Glengyle at the start of the twentieth century) has only been around for about ten years. That age difference mainly reveals itself in the different interiors.

Glengyle is small and relatively new, but older and bigger brother Springbank oozes history. It is one of the last remaining distilleries where they still do everything themselves: from malting the barley to bottling the matured final product. That also means that Springbanks pagoda roof actually has a working kiln underneath it, where the sprouted barley is dried. The majority of the modern day distilleries buy their barley already malted. Not at Springbank, where it seems time has stood still. Not long before our visit the kiln had been used to dry a batch of malted barley. Needless to say, entering it was like setting foot in whisky heaven. What a fantastic smell!

A distillery visit is usually concluded with a whisky tasting. It’s a tradition that has also made its way to Campbeltown, but Macpherson had arranged one with a twist. Not a single whisky from Springbank or Glengyle was poured. He instead opened the doors to Cadenhead’s Kingdom. Welcome to Warehouse #9.

Inside the warehouse the eyes of our lovable group of whisky geeks almost literally popped out of their sockets. Tastings are always good fun, but nothing tops a tasting in an old warehouse, especially once it dawned on us that the tasting would be straight from the cask. And then for the really good news: if you liked what you tasted, you could bottle the whisky right then and there. A one-time, unique opportunity. The whiskies tasted during this memorable Sunday afternoon? Littlemill 1992, Inchmurrin 1974, Clynelish 1990, Highland Park 1986 and a Caol Ila 1991. And last, but certainly not least, a Dallas Dhu from 1979. An excellent whisky that has an extra dimension because there are barely any casks left from this closed distillery. Business is good for Macpherson this afternoon. Almost everybody buys one or more whiskies to take back to the Thalassa. Next stop: Port Ellen.

This is the end of Part 1. In Part 2, which you can find here, we’ll visit Islay and also make an unexpected return to Campbeltown. 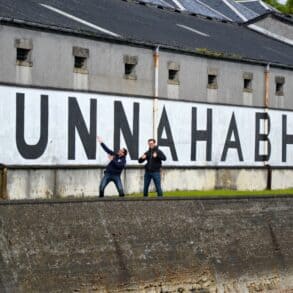