In the first week of June 2014 I went on a sailing trip to the isles on the Scottish west coast. What follows is Part II of my travel report. Missed the first part? No problem, you can find it here.

The weather was perfect when we set sail for Islay. First mate Nathalie decided it was time for her passengers to do something other than drink whisky for a change. About eight of us helped raise the sails by pulling the almost seven kilometers of rope aboard the Thalassa. Captain Jacob Jan Dam looked on approvingly from the wheelhouse. When nearly all sails were up, the ship reached a speed of almost twelve knots, very close to her maximum. The sailing trip from Campbeltown to Islay can take up to eight hours, but we reached Port Ellen in less than six.

Islay is the home of many legendary distilleries, and close to Port Ellen lie three of the most well-known ones. Ardbeg, Lagavulin and Laphroaig. We don’t have time to visit the latter, but the first two will receive plenty of our attention. The tourguides at Ardbeg and Lagavulin have two striking similarities: they are both young and pretty. They fulfill their task admirably, have plenty of knowledge and make sure we have a pleasant tour. But young and pretty doesn’t beat stories from a guy who’s already worked at Lagavulin for 44 years.

The legendary Iain ‘Pinkie’ MacArthur, in his own words, has the shape of a sherry butt: short and round. Pinkie isn’t afraid to speak his mind. Which means he sometimes says exactly the wrong stuff. At least from the perspective of a whisky lover. But it doesn’t really matter: his honesty is refreshing. “Yes, we use caramel to color our whisky”, Pinkie told us. “The average customer wants his whisky to be consistent in color. We also treat our casks with sherry. We leave the Pedro Ximenez in for two weeks, empty it and then fill the cask with our whisky for a sherry finish.”

Bruichladdich was maybe not the most organized tour, but definitely the most fun one. The self-proclaimed Progressive Hebridean Distillers have a multitude of different expressions and sometimes receive criticism for that. But all that was quickly forgotten when we met our tourguide Mary. This woman was just like Pinkie: authentic. She doesn’t give you a standardized tale. Mary took us around the distillery and sort of winged it. “Would you guys like to see my own personal cask? Okay, let’s go there now! You want to taste some new make? Here you go!” That was her attitude. She is the type of person who makes a distillery visit worthwhile. She even got us to sing ‘Row, row, row your boat’.

After almost a week aboard the ship, captain Jacob of the Thalassa decided it woul be better to not sail directly back to Troon, but to make a pit-stop in Campbeltown. Upon hearing this news, it didn’t take long for some members of our ensemble to come up with a great little plan. Maybe we could get Grant Macpherson to once again open the doors of Warehouse #9. Because a lot of people regretted not buying more whisky the first time round.

It was already dark when we arrived in Campbeltown (not before also visiting Bunnahabhain, Caol Ila and Isle of Jura by the way) and about half of the travelers quickly resided to the Ardshiel Hotel. During our first visit to Campbeltown some of the guys discovered the excellent whisky bar that houses inside of this hotel. And more importantly: the hotel staff is friendly with MacPherson and might be able to contact him.

As it turns out, MacPherson was more than willing to come to the Ardshiel Hotel. Covered in paint, because he was midway through a move, but that didn’t seem to matter to him, and we certainly didn’t care. He was handed a carefully compiled list of the whiskies we’d like to have, then he disappeared in the night. “Meet me in half an hour at our shop”, he said before departing. The thirty minutes went by fast. Time to walk to Cadenhead’s Whisky Shop, where Macpherson was already waiting for us with about fifteen freshly bottled whiskies. And since we were there anyway, why not take a look around the shop? In the end we pillaged the store for thousands of pounds, and bought one bottle of Dallas Dhu 1979 to share on the ship.

On the last day of our trip, we sailed from Campbeltown to Troon, with a pit-stop on the Isle of Arran. It almost feels like Scotland is determined to show itself in all its glory one last time. The sea is completely flat and on deck sunscreen and sunglasses are much needed. The visit to Arran distillery turns out to be a wonderful ending to our trip. It was also the final chance to buy some more whisky. Something almost everybody does. I walk away with one of the final bottles of Arran Miss Black, a visitor centre exclusive.

After that final shopping spree the time has come to say goodbye. A calm sea means a lack of wind, so captain Jacob turns on the engine and the Thalassa splices through the sea on her way to our final destination. Every cabin below deck holds a carefully packed suitcase filled with whisky treasures. As we assemble above deck in the evening sun for one final dram, we’re already longing for our own treasure chest at home, which will soon be filled with the haul of this unforgettable trip. 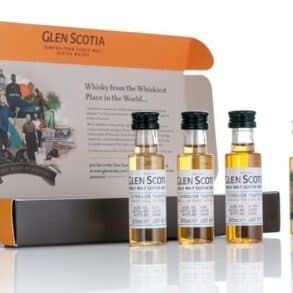 Next
Pilgrimage To The Scottish West Coast Isles (Part I)