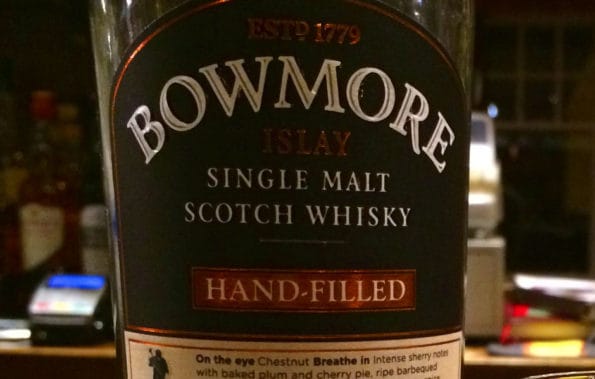 Considering every whisky I’ve tasted so far, I’d say Bowmore is probably my favourite peated Islay distillery. Bunnahabhain stands at the top, but that is a completely different style of whisky. Incomparable. When it comes to peated whiskies, Bowmore is number one for me. Their Tempest-batches might be the best value for money whiskies out there. Just take my appreciation into consideration when reading this tasting note.

Since this is post about a whisky that’s handfilled at the distillery, you might think I visited Bowmore. That’s not true, I tasted this particular whisky during my stay at the Highlander Inn in Craigellachie. It’s an extremely sherried version of Bowmore. I won’t go as far as saying this rivals Cu Dhub in terms of blackness, but it has a really dark color. This is from cask 1215 and I believe it’s since been replaced by a bourbon cask. So even if you plan to visit Bowmore, you won’t be able to get this. Nose: Very sweet with only a tiny hint of smoke. A lot of sherry influence with chocolate and coffee notes. Very meaty and full.
Taste: A warm mouthfeel. Medicinal and smoky, more so than I would’ve expected from the nose. With water it surprisingly gets more creamy and a bit salty. Not as much sherry, just a little bit with a feint wood bitterness.
Finish: Short and spicy with a hint of smoke. Disappears quickly.

A good whisky not a brilliant one. After I tasted it I looked this whisky up on Whiskybase, and to my surprise it has an average score of 90+! Going by that rating, it seems like a no-brainer. That just goes to show that whether you like a whisky or not is nothing more than a matter of taste. Don’t rely too much on ratings by other people.