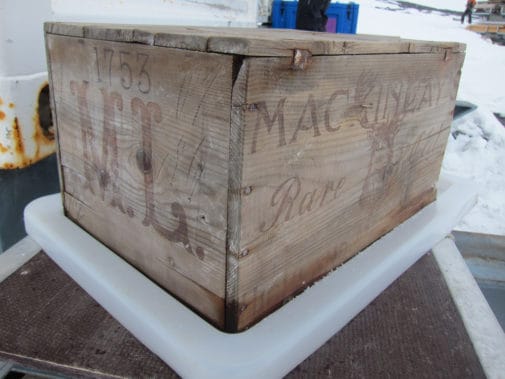 A Fascinating Recreation Of A Very Old Whisky

I just recently watched the documentary ‘Shackleton’s Whisky’ on National Geographic. I didn’t care much for the re-enacted bits of the Shackleton expedition to the South Pole, but the part of the documentary about the preservation and recreation of this unique whisky turned out to be fascinating. It’s great to see Richard ‘The Nose’ Paterson at work. What it must be like to smell the world through his nose! For those of you not familiar with the discovery of Ernest Shackleton‘s secret stash of booze, there is an official website. It should have all the information you need. But first: brace yourself for my tasting notes! Watching the documentary reminded me that I actually tasted the Mackinlay ‘Shackleton Replica’ during a blind tasting of the Dutch Whisky Forum. And I still have the notes. Trying it blind gave me a chance to taste this without prejudice. I tasted the original ‘Discovery Edition‘, not the later released ‘Journey Edition‘.

Color: Very pale, yellow gold.
Nose: I think there’s some nougat, grass and hay. After that it gets sharper. Also some apple or pear and coconut shavings.
Taste: Very smooth and an unbelievably creamy mouth-feel. Some vanilla, peach and caramel. I like it!
Finish: Pretty long, some orange and oak there.

I don’t taste a lot blends, simply because working my way through single malts is a big enough task as it is. It means I don’t have a lot of experience with blends. But I can still tell if a whisky is good, and this one is! Is it worth the 100 euros it is being sold at? That’s a decision you’ll have to make yourself.